A Chorus of Opposition in North Carolina

Nearly 400 active and retired Teamsters attended a Greensboro meeting on proposed Central States pension cuts hosted by Kenneth Feinberg, of the U.S. Treasury Department. As at prior town hall meetings in Columbus and Milwaukee, Feinberg was met with a chorus of opposition to the cuts. 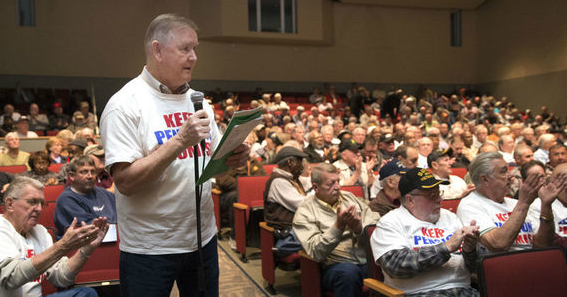 Tommy Burke, a retired UPS Teamster from Fayetteville (pictured), spoke to the lack of transparency when it comes to Central States finances over the years and questioned whether the Central States numbers could be trusted. Burke called on Feinberg and the Treasury Department to extensively review any numbers included in the Central States “rescue plan” submission.

Burke is an active leader in the North Carolina Committee to Protect Pensions – a committee, like many others around the country, that is organizing to protect the hard-earned pensions that support 200,000 families.