The latest quarterly financial report of the Central States Pension Fund (CSPF) shows that the fund has treaded water during 2017, due to the continued run-up in the stock market. But the underlying problems have only worsened. 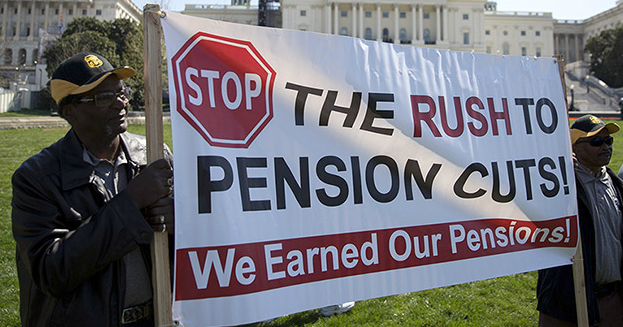 The fund would have made more money in the stock market upturn, but has moved out of stocks, in a defensive move to protect declining assets. Only 42% of CSPF assets are in stocks, half of that in index funds, down from 65% stocks as recently as a year ago.

The Independent Special Counsel Report for the second quarter reviews the problems facing the fund and its projected insolvency, without federal assistance to protect the earned pensions of Teamsters and other workers.

The financial and analytical report of the health and welfare fund shows a completely different picture: the fund continues to pile up assets.

The quarterly financial and analytical reports of the pension fund and H&W fund are available only through Teamsters for a Democratic Union. Neither the fund nor the IBT make them available to members.

Other material in the Special Counsel report...

Construction on the new building being built by the Central States H & W Fund, which will also house the pension fund, is slated to begin within weeks.

The report states that the Pension Benefit Guaranty Corporation (PBGC) multiemployer fund is presently slated to run out of money by 2025, approximately when Central States is projected to go insolvent, unless there is federal assistance to both, and raising premiums to support the PBGC.

The report contains (on page 6) a bitter complaint that the Treasury Department approved a plan for MPRA pension cuts to save the New York State Teamster Fund, but disallowed the Central States proposed cuts, due to the broad opposition to those cuts generated by the pension protection movement.

The report explains why the fund supports the UPS-backed plan to save the fund with federal assistance. They state the IBT/Brown proposal will not gain Republican support and thus has little chance to pass, and may distract and delay consideration of a proposal which can pass. The report states that time is short as the fund could reach the point of no return (pages 6-7).

The Government Accounting Office (GAO) report on the fund, in the works for nearly two years, may issue by the end of the year or early in 2018 (pages 9-10).