Allegations of insider-dealing and violations of fiduciary duty swirl around the top officers of the Brotherhood of Locomotive Engineers and Trainmen (BLET-IBT), following a tentative labor contract they signed. 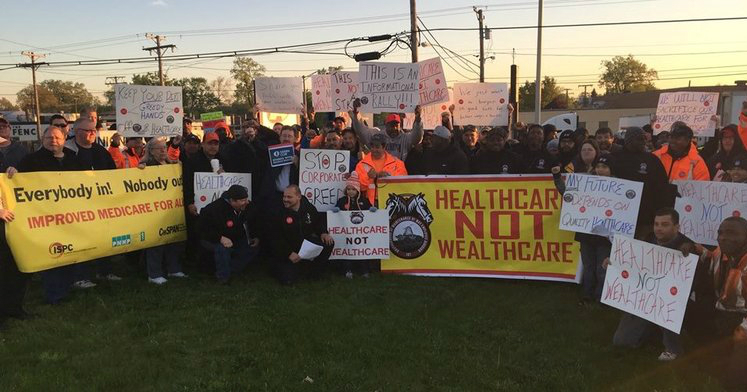 The agreement was reached on October 6 by the BLET division of the Teamsters, along with five other rail unions bargaining as one coalition. However, the 35,000-member Brotherhood of Maintenance of Way Employees Division (BMWED-IBT) leads a separate rail labor coalition of two unions, and has denounced the deal. They have targeted health care concessions as a major issue.

Now it has come to light that leaders of the BLET, including BLET President Dennis Pierce, have accepted gifts from United HealthCare, which the contract designates as the provider and administrator of rail workers’ healthcare.

One officer of the BMWE, the Pennsylvania Federation General Chairman, filed charges against Pierce with James Hoffa, as well as the Independent Investigations Officer. The charges include employer and vendor forms filed with the Department of Labor indicating that Pierce and several other BLET officials received gifts in 2014-2016 worth thousands of dollars from United HealthCare and other insurance companies.

The charges call for the IBT to halt the ratification vote on the contract. So far, we know of no response or action by Hoffa.

As the ballots are about to go out to some 80,000 rail workers, almost half of them Teamsters, the BMWE is urging their brothers and sisters to vote no, and stand up against health care concessions which will eat up the 2% annual raise.

BLET leaders are urging a yes vote, with the argument that work rules are saved, and that nothing better can be obtained under the Trump administration’s Presidential Emergency Board (PEB). If the agreement passes, it will likely form a pattern for the two other coalitions of rail unions.

Rail unions remain deeply divided. The Teamster engineers in the BLET and the Teamster track workers in the BMWE are in different bargaining coalitions. The Teamster rail groups are two of the three largest rail unions and should be a force to unite all the unions in a single bargaining front for the future, with a commitment of solidarity: no deal until each union agrees. Check out the prescription for future unity and solidarity issued by the rank and file group, Rail Workers United.