How You Can Help Beat Hoffa and Elect Teamsters United

Members are stepping up to help elect Fred Zuckerman and Teamsters United. 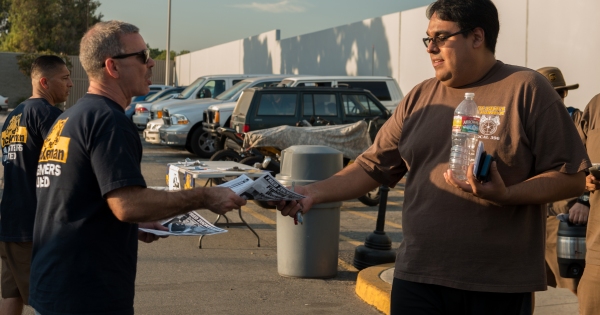 Ballots are mailed out to every Teamster on October 6 and will be counted on November 14.

It will take 150,000 votes to beat Hoffa and elect Fred Zuckerman and the Teamsters United slate.

Teamsters United volunteers are organizing to make that happen. TDU members are all-in as part of the effort.

We’re doing more than mailing back our ballots. We’re campaigning and informing other Teamster members. We’re
mobilizing to make sure members vote.

Most Teamsters don’t even know there’s an election. The majority of ballots will get thrown out. Last time, eighty percent of the members didn’t vote.

That’s a sorry statement. But it’s also an opportunity. The members who do vote will determine the future of our union.

If we reach out to Teamster members and boost voter turnout so that 1/3 of Teamsters vote, Teamsters United will win and Fred Zuckerman will be the next General President.

“I pass out leaflets at my job before and after work. When the ballots go out, I’m taking time off to get the word out at other companies. We need to inform people so they know what’s going on—and we need to be there when the ballots come out to remind people to vote.”
Rafael Sanchez, Holland, Local 71, Charlotte, N.C.

“Members have six weeks to vote by mail starting on October 6. I’m helping organize a Teamsters United phone bank to call members to make sure they got a ballot and remind them to vote.”
Martin Short, Jack Cooper, Local 414, Fort Wayne, Ind.

“When the ballots go out, we want to call and text 150,000 members to remind them to vote for Fred Zuckerman and Teamsters United. I tell people, ‘Give me your number and we’ll call you and make sure you got your ballot.’ Then I send the info in to the campaign. It’s easy.”
Richard Blake, UPS, Local 512, Jacksonville, Fla.

“One of the keys to winning is for Fred to be able to send a mailing to every member to remind them to vote. That costs big money. I’ve donated $500 and I’ve been selling raffle tickets to raise more money. I can’t afford to have Hoffa negotiate more concessions and cuts. I’m donating up front as an investment in my future.”
Peter Smith, UPS, Local 771, Lancaster, Penn.