MEDIA ADVISORY: Less than two weeks before the vote count in the national Teamsters Union election, a court-approved anti-corruption officer has charged the number two Teamster official with obstructing corruption investigations by hiding and destroying thousands of union documents and emails. 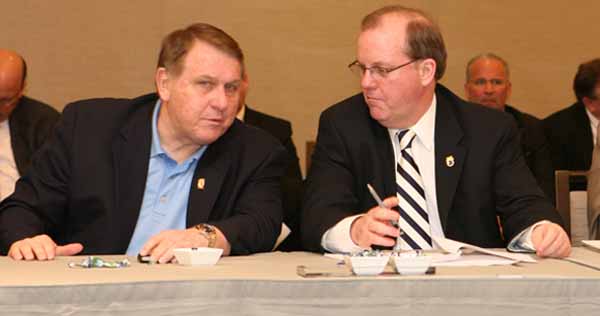 The charges against Ken Hall were released in a 42-page report by the Independent Investigations Officer (IIO), an anti-corruption position established under the settlement of a RICO lawsuit filed against the Teamsters by the Justice Department.

Hall, the General Secretary Treasurer, is the highest ranking official in the 1.3 million-member International Brotherhood of Teamsters after General President James P. Hoffa. The charges against him will likely result in his expulsion from the union and cast a shadow of uncertainty over the election for the union’s top officers.

Teamster members have been voting by mail ballot since October 6 to elect their International Union officers, but the charges against Hall did not become public until November 2. The ballots will be counted on November 14.

Hall is charged with obstructing the IIO, who is investigating top Teamster officials, including Hall, for corruption, rigging the bids for business with Teamster benefit plans, taking employer gifts and payoffs, and embezzlement.

“The obstruction occurred when Hall and his agents knew that the Independent Investigations Officer was investigating the conduct of certain high-ranking officers, fund trustees and union employees, including Hall himself,” the IIO report states.

The fact that Hall is willing to risk expulsion from his lucrative and powerful post indicates how important the cover-up is to Hoffa and his inner circle.  Hall was charged – and not yet Hoffa – because the General Secretary Treasurer has control of all the union’s files and records.

After issuing charges against Aloise, the IIO expanded its corruption investigation to include other Hoffa-Hall administration officials. But Hall stonewalled the investigators to prevent the corruption scandal from becoming public until after the International Union election.

The IIO report details how Hall withheld emails that were requested by subpoena while others “mysteriously disappeared from the IBT email system,” according to the report.

Hall withheld an email with the subject line, “Charlie Bertucio payout.” Hoffa administration officials are being investigated for rigging the bidding process for a health insurance contract with a Teamster benefit fund in favor of Bertucio, who took Hoffa and other Teamster officials on golf trips to Europe, among other gifts. Bertucio landed the contract despite submitting the most expensive bid.

The Teamsters is the largest union in North America with direct elections for its top leadership. The Hoffa-Hall slate is being challenged by Fred Zuckerman, the President of the 17,000-member Louisville Local 89 and an outspoken critic of contract concessions and Teamster corruption.

Zuckerman and his Teamsters United Slate are backed in the race by Teamsters for a Democratic Union (TDU), the national reform movement of Teamster members.