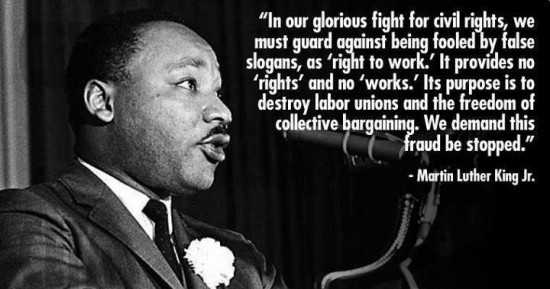 Dr. King was a powerful voice for economic justice, as well as for civil rights for African Americans. It is worth watching his last speech, delivered to strike sanitation drivers in Memphis.

“…If you stand up straight, people can’t ride your back. And that’s what we did. We stood up straight.”

That's how Taylor Rogers explains the success of the 1968 Memphis sanitation strike. Rogers was a principal organizer of the historic strike.

That strike ended in victory, but it was also the setting for the tragic assassination of Dr. Martin Luther King.

The strike followed the death of two black workers, Echol Cole and Robert Walker, who were crushed by a faulty garbage truck compressor. The needless deaths became a rallying cry for recognition—of the union, of the workers’ rights, and of their basic humanity as African-American men in the still-segregated South. In response to the tragedy, the city’s sanitation department gave each of the grieving families one month’s pay and $500 for funeral expenses. No one from the city government would attend the funerals.

A broad coalition of labor, religious and community groups responded by launching what became a crucial battle for civil and labor rights. Mayor Henry Loeb refused to negotiate with the workers and declared the strike illegal. An early march through downtown Memphis garnered attention for the workers’ cause, but ended in violence as police sprayed protesters with mace. Mounting tensions led to the cancellation of talks between the city council and the workers. Further protests ended in chaos, mass arrests, and the police murder of Larry Payne, a 16-year-old boy who was marching alongside the strikers.

Dr. Martin Luther King Jr. was warned by many that the situation in Memphis was too volatile to resolve peacefully. Nevertheless he made the trip to Memphis to rally the city and speak on behalf of the as-yet-unrecognized Local 1733. On this trip Dr. King tragically met his assassin’s bullet on the balcony of the Lorraine Motel.

King’s murder resonated the world over, yet perhaps nowhere more loudly than in Memphis. A shaken city finally bowed to the union’s demands and began collective bargaining. AFSCME (American Federation of State, County and Municipal Employees), who had worked alongside King and the sanitation workers, was also instrumental in the settlement.

Local 1733’s contract victory included higher wages, dues check off, and the updating of the antiquated sanitation equipment. Another practice that had infuriated black workers—sending them home on rainy days without pay while white supervisors sat around and collected a paycheck—was also ended.

We remember this as a victory not only for civil rights and labor, but also for the broader movement for rank and file democracy. This strike was initiated, organized and carried out not by top union brass but by rank and file workers and their local leaders. In fact, during the strike’s initial stages, AFSCME’s leaders tried to dissuade the workers from seeking all of their demands.

From the organizing efforts of the Brotherhood of Sleeping Car Porters in early 20th century South Chicago to the courageous efforts of Cesar Chavez to organize migrant farmer workers, the labor movement has been at its best when uniting with the cause of civil rights. TDU salutes all past and present rank and file movements for dignity, respect, and economic justice, here and abroad.