October 17, 2013: With the UPS contract long expired and peak on the way, contracts and contract supplements or riders covering over 75,000 UPSers still remain to be negotiated.

The contracts, supplements and riders covering Teamster members in the Western Region, Louisville, Ohio, Indiana, Philadelphia, Western Pennsylvania, and New Jersey Local 177 all need to be voted a second or third time.

Two additional contracts covering all UPS Teamsters in Illinois and parts of Indiana and Iowa have barely started. Chicago Locals 705 and 710, covering some 15,000 Teamsters, each negotiate their own contracts separate from the national master agreement.

The Information Brownout at UPS gave way to an unprecedented sales job in the second round of voting in October.

The Central Region Supplement narrowly passed by 53.6 percent. UPS will be able to exploit the 17(i) loophole to fire Teamsters for the vague "other cardinal offenses" for another five years.

The Metropolitan Philadelphia supplement passed by an even skimpier 1,004 to 918 margin. Three of the four locals, covering all of the largest hubs, rejected it. But a 10-1 yes vote in Wilmington, Del. squeezed the supplement through.

Hoffa and Hall did not even try to re-vote some of the supplements, because they knew they would lose. The Western Pennsylvania Supplement, rejected by 6-1 in June, was held back along with others.

Philadelphia Local 623 members showed that Hoffa, Hall and UPS had reason to be afraid. They Voted No by 71 percent. UPS Teamsters in Ohio also rejected their Rider for a second time.

In a welcome exception to the concessions, UPS Teamsters in New York Local 804 won major improvements in their supplement, including a $400 pension increase, 150 full-time jobs, and grievance procedure reform.

Rank-and-file solidarity has paid off and changed the Teamsters Union for the better—even if the Vote No movement wasn’t able defeat the Central and Metro Philadelphia supplements.

Hoffa and Hall were forced to reverse many healthcare cuts and improve TeamCare benefits.

The new benefits are not what members wanted, but they are a whole lot better than what Hoffa, Hall and UPS tried to make members accept in the first contract vote.

The 2013 contract fight has awakened a sleeping giant—250,000 Teamsters at UPS and another 12,500 at UPS Freight—who can be the backbone of a movement for change in the Teamsters.

Members continue to organize for improvements in some 11 unsettled supplements and riders, plus the Chicago Local 705 and Local 710 contracts. 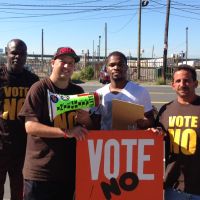 UPS Teamsters shot down the Philadelphia Local 623 supplement by 71 percent in the second contract vote.

In addition to concerns about health benefits, Vote No leaders have pushed for improvements in their supplement, including more full-time jobs, and for rank-and-file Teamsters to be put on the negotiating committee.

Leaders of the Vote No movement are running for Local 623 office as the Integrity Slate. 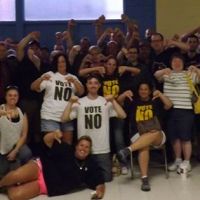 A major headache for UPS management and Hoffa-Hall is the Louisville Air Rider.

Local 89 officers, stewards and members have stood united against the Hoffa-Hall concessions, voting by 88 percent against the Central Supplement in the second round.

The Air Rider itself has not even gone out for a first vote yet, because the company is stonewalling and has blocked serious bargaining.

The Air Rider covers 8,800 Teamsters. The last thing management wants is a strike vote taken at the Louisville Worldport.

Ken Hall will either have to back the local’s reasonable proposals for improvements or resort to more old guard methods, like an IBT takeover of contract negotiations.

The Ohio Rider has been rejected for a second time. The Indiana Local 135 Rider has not been re-voted yet. The Western Pennsylvania supplement hasn't either, after being rejected by a 6-1 margin. 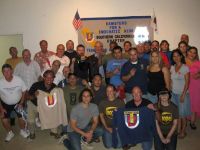 The Western supplement and big Southwest Rider and the New Jersey Local 177 supplement all need to be voted.

Hoffa, Hall and Western officials saw the Southwest Rider, with over 20,000 Teamsters in California, Nevada, Arizona and New Mexico, defeated by nearly a 3-1 margin back in June.

Members have been told for months that "soon" they would get a look at the new health care benefits they will be offered in a separate "carve-out" health fund. Will "soon" finally come in November?

Meanwhile, have IBT officials bargained any improvements on other important issues in the past four months? The brownout continues.