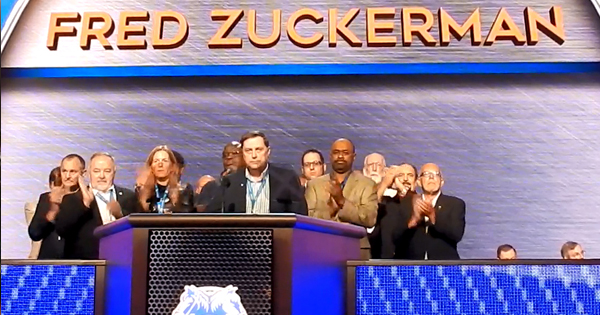 Hoffa and Ken Hall tried to prevent an election by blocking Teamsters United candidates from getting on the ballot. They failed.

Fred Zuckerman and a slate of twenty other Teamsters United candidates will appear on the ballot in every Teamster region.

The Hoffa forces successfully blocked the nomination of our candidates for Western Region Vice President and Teamsters United did not run in Teamsters Canada so those positions are elected by acclimation.

Teamsters United supporters are launching a nationwide Teamster-to-Teamster outreach campaign to inform members about the election and turn out the vote. It will take 175,000 votes to win this fall.

“If you want Teamster power, we need more than your vote. We need your voice. Get involved in this campaign,” said General President candidate Fred Zuckerman.  “Turn out the vote and we will win a new day for our union and a new day for the labor movement.”

Get involved in the Teamsters United campaign or visit or Organizing Hub to find out more about next steps for campaign volunteers.