Over 800 Turn Out to Voice Opposition to Proposed Cuts

Karen Friedman from the Pension Rights Center spoke before a packed auditorium of over 800 retired and active Teamsters and family members at the Treasury sponsored public forum with Kenneth Feinberg in Detroit.

To no surprise, she got a standing ovation following her remarks opposing the proposed cuts to hard earned benefits. She was joined by a list of nearly 50 other speakers - each one who rose to oppose the cuts. The sign up list to speak was over 140. 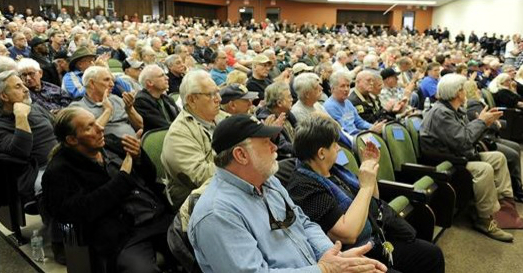 The crowd was primarily from Michigan - some making a trip of over three hours - and they were joined by pension activists from Toledo, Ohio and Ft. Wayne, Indiana. It was clear that 99.9%, if not the absolute majority, joined the speakers in opposing the cuts.

Feinberg noted that the speakers' remarks were similar to those he has heard at previous sponsored meetings. But like those, he was very attentive to each speaker and the spirit of opposition in the room. He announced an upcoming meeting in Kansas City but offered no details. Other Treasury representatives indicated the Kansas City meeting could be as early as next week.

John Murphy from the IBT was in attendance as were many Michigan local officers and representatives. None spoke other than a current officer of Teamsters Local 372. Feinberg did note the IBT opposition to cuts and Karen Friedman thanked Murphy, the IBT, the AARP and TDU for their support in this fight.

Feinberg visits Minneapolis Tuesday, February 9. We expect hundreds to attend that meeting. Opposition support is building. We need to move beyond the Feinberg meetings to coordinated actions in local areas in March and it's time now to be making concrete plans for being in Washington for the rally on April 14.