Disgraced International Union Vice President Rome Aloise will finally face the music on the corruption charges against him. His hearing began today and will wrap on March 16. 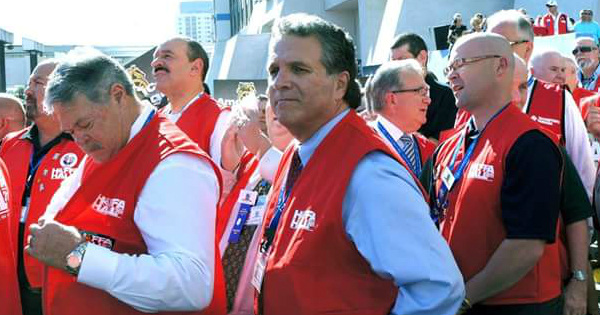 Today extensive charges against IBT Vice President Rome Aloise were read at the start of the hearing in San Francisco.

The corruption charges were filed against him on February 10, 2016. But Aloise has maneuvered and delayed to avoid a hearing for 13 months.

Today, the presiding judge, Independent Review Officer Barbara S. Jones, stated she expects to conclude the corruption hearing on Thursday, after she questioned attorneys on how long they need. She then adjourned the hearing until Thursday morning.

Veteran anti-corruption investigator Charles Carberry is presenting the case on behalf of the Independent Investigations Officer. Carberry intends to question Aloise, and will rely on the extensive record and depositions to prove his case.

Edward McDonald leads Aloise’s team of lawyers, and stated he would call three witnesses. Two of them are the CEO and a labor relations official for the Gillig Corporation, which employs some 600 members of Local 853, headed by Aloise.

McDonald’s clients include one of the nation’s largest waste management corporations (major Teamster employers), domestic and foreign bank officials, a member of the Saudi royal family, and the former chairman and deputy chairman of the Russian Securities Commission.

It seems appropriate that Aloise has corporate bosses and a corporate lawyer leading his defense.

Aloise was repeatedly caught asking employers for gifts and favors during contract negotiations, including at Southern Wine and Spirits where emails from corporate executives revealed how Aloise sold out members and then secured free tickets to a Playboy party at the Super Bowl.

Aloise is also charged with negotiating a sham contract with Charles Bertucio, an investment firm owner who took Hoffa-Hall officials to sporting events and on European golf junkets. Hoffa-Hall officials later allegedly rigged the bidding at a Teamster benefit fund to award Bertucio the lucrative business.

Two hours before the hearing started, a small group of Teamster officials loyal to Aloise put jackets and other objects on every chair in the hearing room to block members from attending.

An alert Teamster sister got to the hearing early and secured a number of more chairs so that members were not locked out of the hearing.