The director of the Pension Benefit Guaranty Corporation (PBGC) is to leave his post in August after four years in the role.

In a letter to colleagues on Friday, Josh Gotbaum said, as he had three children in college, he had promised his wife he would return to the private sector, the Wall Street Journal (WSJ) reported.

I clean high school bathrooms, and my new $15/hour salary will change everything

Monday through Friday, my full-time job is cleaning restrooms at Van Nuys High School. But that work is not the hardest part of my life. The hardest part is saying goodbye to my 4-year-old son when he asks me not to go to work again. In order to make ends meet, I also work weekends and nights.

I know I’m lucky to have a full-time job as a facility attendant in the Los Angeles Unified School District. I’ve done that for 10 years, and some days are better than others, but I like the work, and my co-workers are a supportive second family. We don’t interact much with students, but those of us who do custodial work are eyes and ears for teachers and administrators. If I see a student needs help of any kind, I take pride in letting the right people know.

Truck drivers for three companies that move cargo in and out of the ports of Los Angeles and Long Beach launched a strike early Monday morning, with the support of organizers of the Teamsters union the drivers are hoping to join.

The strike involves 120 drivers for three transport firms including Total Transportation Services Inc., Green Fleet Systems and Pacific 9. The drivers have staged strikes and labor actions in the past year, but this is the first time they've walked off the job with no plans to return.

Pregnancy and Your Rights: UPS

If you were outraged by the Supreme Court’s Hobby Lobby decision, take a deep breath and get ready for the next battle over women’s rights.

A case that will affect millions of working women is on the Supreme Court docket for the term beginning Oct. 6. Young v. United Parcel Service will test the law prohibiting employment discrimination against pregnant women. And it’s anybody’s guess how this court will rule.

Click here to read more at The News & Advance.

Give Veterans the Health Care They Deserve, Staff the VA

The recent revelations of long waiting lists for military veterans seeking treatment at Veterans Affairs (VA) health care facilities and of management cover-ups has prompted AFGE to again call on Congress to fully staff the VA in order to provide the health care veterans deserve.

Posted on News by Teamsters For A Democratic Union Tdu · June 19, 2014 7:58 AM
June 13, 2014: Eighty years ago, in a defining moment for the American labor movement, the Teamsters Union defeated employers in a titanic truck strike in Minneapolis. It made Minneapolis a union town, spurred over-the-road organizing across the Midwest and paved the way for the Teamsters to become a powerhouse international union. 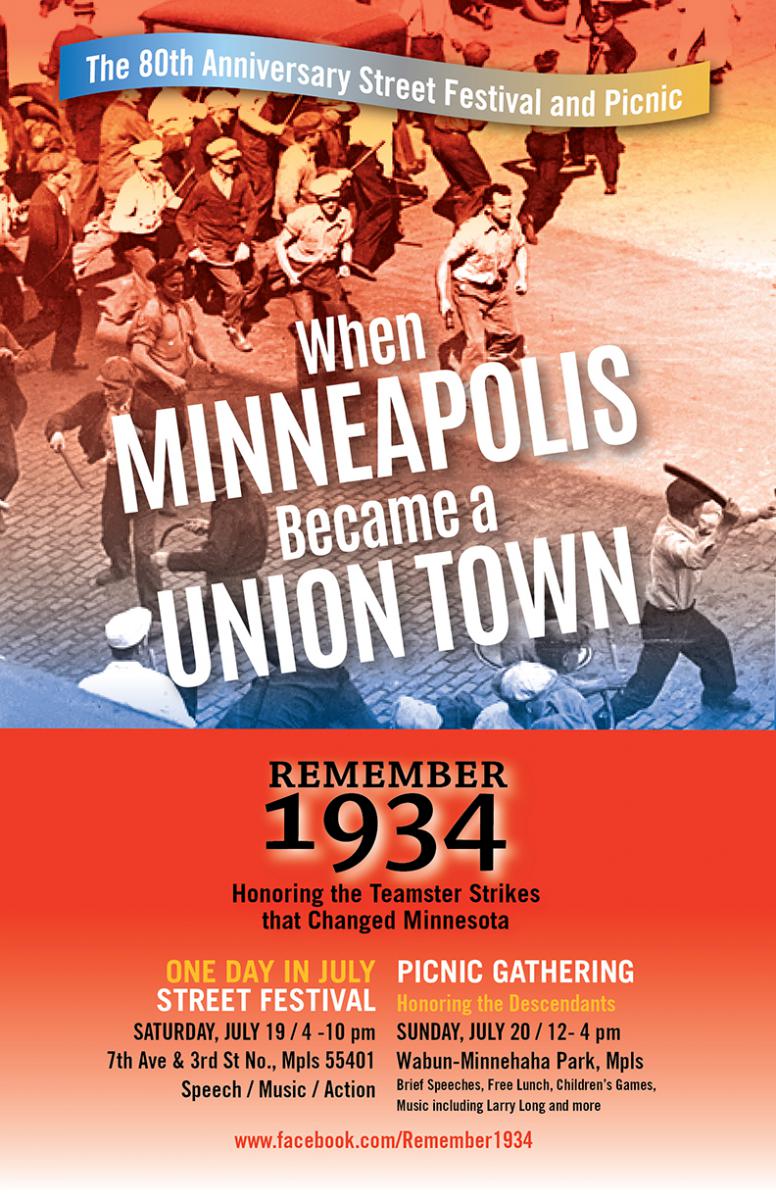 The strike will be celebrated in Minneapolis in July with two events:
The July weekend was chosen because it coincides with a turning point in the strike that occurred on July 20, 1934 when police opened fire on unarmed strikers, shooting 60 people, almost all in the back and killing two strikers, Henry Ness and John Belor.
The Remember 1934 Committee is organizing the event and includes rank-and-file activists and support from a large group of Minnesota labor unions, including Teamster locals. Members of the Minnesota chapter of Teamsters for a Democratic Union are helping organize the events.
Teamsters Local 120 has called a march of its members from the Star Tribune printing plant to the festival on July 19.
The Minneapolis struggle employed innovative strategies and tactics that provide valuable lessons on how to win a strike, including a daily strike newspaper, cruising pickets, a committee of 100 that consulted with the leadership, and mass mobilizations of workers and the unemployed.
More information about the July 19-20 events commemorating this historic strike can be found here.

Posted on Media by Teamsters For A Democratic Union Tdu · June 19, 2014 6:05 AM
Center for Economic and Policy Research
June 19, 2014
View the original piece

Over the past four decades, women have played increasingly important roles as breadwinners in their families. At the same time, women’s share of unpaid care work and housework has remained high. A new report from the Center for Economic and Policy Research (CEPR), “Women, Working Families, and Unions,” explores the role unions play in addressing the challenges facing working women and families in balancing their work and family responsibilities. The paper looks at trends in unionization for women; the impact of unions on wages, benefits and access to family and medical leave; and the role of unions in addressing work-life balance issues.

“There are few other interventions known to improve the prospects for better pay, benefits and workplace flexibility as much as unions do.  Anyone who cares about the well-being of women workers and working families should also care about unions,” states Nicole Woo, a co-author of the report.

For the first time, the International Brotherhood of Teamsters is asking a federal judge to end 25 years of strict oversight intended to root out corruption and alleged Mafia influence in the union's highest ranks.

"The union's rank-and-file members and duly elected officers should be allowed to reclaim control of their union's affairs," Teamsters lawyer Viet Dinh wrote in a June 4 letter to Judge Loretta Preska of the U.S. District Court for the Southern District of New York.

Federal prosecutors indicated in their response that they would support scaling back government control over the union but not eliminating the measures.

"Corrupt and undemocratic practices persist at all levels of the union," Assistant U.S. Attorney Tara La Morte wrote in a June 12 letter to the judge.

A union spokesman disagreed with that assertion.

The 1.3 million-member Teamsters entered into a consent decree in 1989 to settle a racketeering lawsuit brought a year earlier by the Justice Department.

In the suit, then-U.S. Attorney Rudolph Giuliani alleged the union had made a "devil's pact" with the Mafia by allowing it to control officer elections. The suit named as defendants 18 members of the union's executive board and 26 alleged organized-crime members, 25 of whom had been convicted of crimes such as extortion, embezzlement and illegal union payoffs.

The union agreed to oversight, including a court-appointed supervisor who oversees the election of top Teamster officers and an independent review board to investigate allegations of corruption.

There is no clear timeline for the case. The union and prosecutors still have to file motions that would precede a hearing.

In addition, a rank-and-file group called the Teamsters for a Democratic Union, a frequent critic of current union President James P. Hoffa, is fighting the effort. The union "has made progress, but it is not yet a stable and reliable democracy," the group wrote on June 9 to the judge.

Teamster officials have lobbied unsuccessfully in the past for an end to the decree, including through negotiations with the Clinton administration.

The current effort grew out of talks with the U.S. attorney's office that didn't result in an agreement, Teamsters spokesman Bret Caldwell said. "The effort to rid the union of organized crime has been successful, and it's time to move on," he said.

Mr. Dinh wrote that charges investigated by the review board, which doesn't have prosecutorial power and refers cases back to the Teamsters for disciplinary action, have plummeted. Cases that involved alleged racketeering or other activity that prompted the consent decree fell to 33 in the past decade, from 144 in the first five years of the consent decree, he wrote.

Prosecutors said that misconduct by Teamsters was far from sporadic in recent years and alleged that it involved high-ranking officers. They cited several examples, including a Teamster local president and his son who were found by the review board's investigator to allegedly have looted the local from 2007 to 2012 and was disciplined by the union for embezzlement, among other things.

The local president was also a vice president of the international union for part of the time in which the misconduct occurred, prosecutors said.

"We vehemently disagree with the U.S. attorney's assertions that corruption remains in the teamsters union," Mr. Caldwell said. He said the cases the U.S. attorney points to aren't related to organized crime or its influence, the reason for entering into the consent decree.

President Barack Obama supported ending the consent decree in 2008 when he was a candidate for president. At the time, a spokesman for the then-candidate said organized-crime influence had drastically declined. On Tuesday, a White House spokesman declined to comment on the case and referred questions to the Justice Department.

A spokesman for the U.S. attorney in the Southern District of New York said the office had no comment beyond the letter it has filed with the judge.

The Teamsters rank-and-file group, the TDU, has backed candidates who unsuccessfully have challenged Mr. Hoffa, who became president in 1999 and is serving his fourth term.

Most recently, Mr. Hoffa won re-election in 2011 with 60% of the vote against two candidates, including one backed by the TDU.

"Hoffa claims the union has improved, and we agree," Mr. Paff said. "But it's improved precisely because the consent order guarantees those elections."

Posted on News by Teamsters For A Democratic Union Tdu · June 13, 2014 12:10 PM
June 13, 2014: Tom Glidden, a UPS driver at the Maple Grove, Minn. UPS facility, has passed out Teamster Voice for years. He does it in the parking lot before and after work and leaves a few copies in break areas.
UPS management told him to stop. Now the National Labor Relations Board (NLRB) has directed management to back off and respect the rights of Teamster members.
In May 2013 Tom’s supervisor told him he would be disciplined if he continued to pass out the Teamster Voice or any contract-related materials. Glidden knew his rights and contacted TDU. TDU attorney Barbara Harvey then filed labor board charges.
Management at the Maple Grove UPS facility must now post a settlement agreement that informs all Teamsters that they have the right to distribute union-related information, including TDU literature, in non-work areas at non-work times.
“I know how important it is to get info out to Teamster members. Knowing more about the issues we face makes us stronger as a union. It gives us more power to enforce our contract,” Glidden said.
Glidden is not the only Teamster that UPS tries to stop from distributing union information. If management interferes with your rights, contact TDU for help.

Leslie Orear, 103, Helped Bring Together Black and White Packinghouse Workers in the 1930s

Leslie Orear, a lifelong labor activist, died in Chicago on May 30 at the age of 103. After entering the Chicago stockyards at a time when the idea of unions for blue-collar workers was spreading like wildfire, Orear quickly emerged as a voice for stockyard workers.

Leslie Orear started in the giant packing house’s sweet-pickle shipping department in 1932, tying string onto hunks of bacon. It was often hot and stunk, and the pay was a measly 32.5-cents an hour.