Fred Zuckerman and UPS Teamsters talked contract issues and made organizing plans to win a strong contract on a national conference call on June 10.

Sign up to join the Teamsters United Contract Action Team. 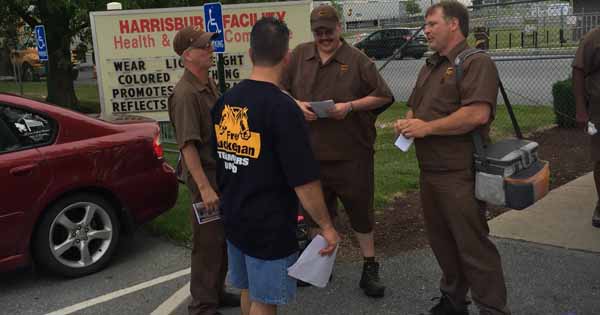 Fred Zuckerman reported on the meeting of Teamster officers at the UPS National Grievance panel this week.

Zuckerman told members that Teamsters United would lead a grassroots campaign to reverse the givebacks from 2013 and win what members were promised in the last contract.

“Members were promised that the contract would deal in a comprehensive way with harassment, retaliation, unfair discipline and 9.5. That was a snow job,” Zuckerman said.

“Harassment, discipline and working conditions are worse than they have ever been at UPS and UPS Freight. The 9.5 language is a joke. Part-time pay and conditions for inside workers are outrageous and it’s got to change,” Zuckerman said.

“During the election, we built a nationwide campaign network and won 70% of the vote at UPS and UPS Freight,” Palmer said. “The Contract Action Team will build on that to inform and unite UPS and UPS Freight Teamsters to fight for the contracts that members deserve.”

Teamsters United will be issuing contract bulletins and a Contract Unity pledge. UPS Teamsters will be asked to sign the pledge to stand united to defeat givebacks, stop harassment, and win a good contract.

“We have proven that we can win any fight that we take on,” Zuckerman said. “We won the majority of the vote in the United States. We won 70% of the vote of UPS and UPS Freight Teamsters.

“We have the leverage and we will win if we all do our part,.” Zuckerman said.

Do your part. Sign up to join the Teamsters United Contract Action Team.