James Hoffa and Ken Hall are publicly at odds as the IBT and the Central States Pension Fund are lining up behind competing proposals to address the Teamster pension crisis. 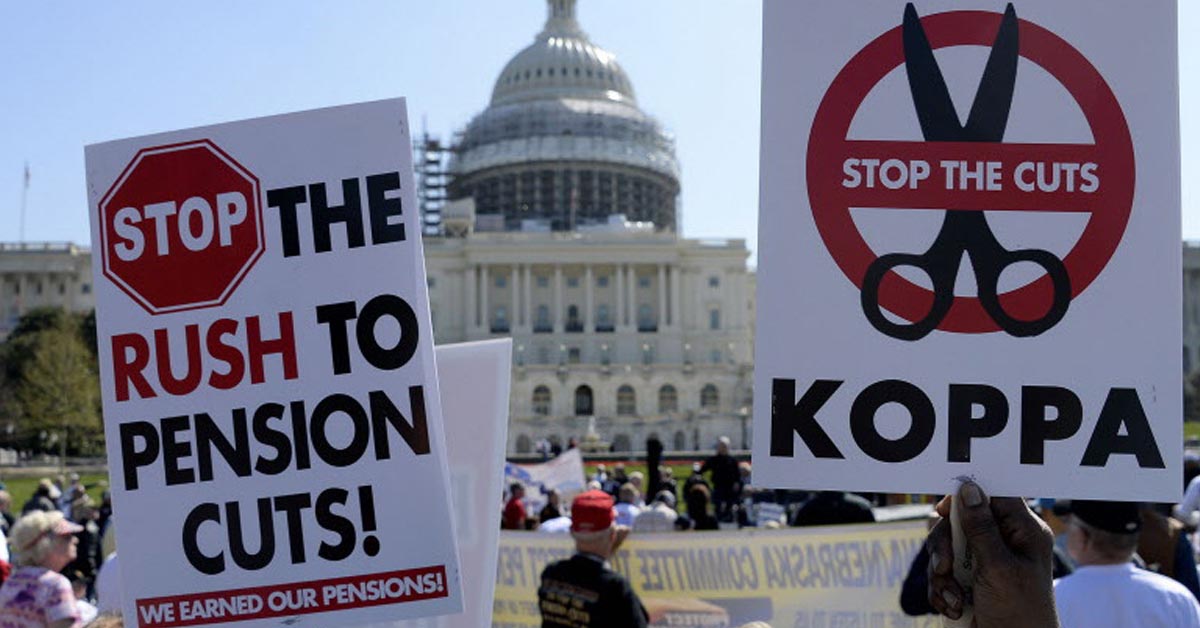 Just days ago, the International Union unveiled a pension legislation proposal, which was touted in the media by IBT Vice President John Murphy, Hoffa’s point man on the pension crisis.

But yesterday General Secretary-Treasurer Ken Hall told a major meeting of Teamster local officers that the Hoffa-Murphy plan “is not going to work,” and that he supports legislation that is being promoted by UPS with support of the Central States Fund.

The pension blockbuster and Hoffa-Hall split occurred on June 1 at a major meeting of Teamster local officers from the Central and Southern regions in Chicago, where Central States Director Thomas Nyhan briefed officers on the proposal which would cut current and future pensions by 20%, and secure a long-term funding stream for pension payments.

Under the proposal, the federal government would provide a multi-billion dollar loan to Central States (and other troubled plans) at a low interest rate of one percent.

The loan would allow Central States to stabilize and rebuild its assets over time, with benefits paid out from the loan.

The proposal, which would need approval by Congress, was originally put forward by UPS. The federal government currently has over $1.1 trillion in outstanding loans to private entities.

Nyhan reported that Central States has run the numbers and concluded that Hoffa’s pension plan would not work, and that the proposal put forward by UPS could work.

Three years into the pension crisis, the Hoffa-Hall administration is in chaos, with Hoffa promoting one plan and Hall openly criticizing it and promoting another.

Not a single Teamster official at the Central States meeting spoke in defense of the IBT’s plan.

Fred Zuckerman told the meeting that time is running out and that a plan is needed that will save Teamster retirement benefits and the pension funds.

“Four hundred thousand Teamsters in the Central States are at risk of losing their pensions and tens of thousands of Teamsters in other funds face the threat of pension cuts. The clock is ticking to find solutions to the pension crisis and at this critical hour the Hoffa-Hall administration is at odds and in disarray,” Zuckerman said.

“This is worse than weak leadership. It is a betrayal on one of the most profound crises facing Teamster members, retirees and their families, said Zuckerman.”

“Teamsters and retirees have the right to the details about proposed plans to address the pension crisis,” Zuckerman said. “The pension crisis needs a solution and we will support a viable solution.”

Pension advocates -- including TDU, the National United Committee to Protect Pensions, the Pension Rights Center, the AARP and others – are backing the Keep Our Pension Promises Act (KOPPA) as the best solution, which protect all earned pensions.

We realize compromise will likely be required to get a solution, but we start from the point of defending hard-earned pensions.