Overpaid & Out of Touch

Chicago Joint Council 25 bigwigs Becky Strzechowski and John Coli are some of the Teamster officials at the top of this year's $200,000 Club in the current issue of Teamster Voice. Find out who else made it on the list. 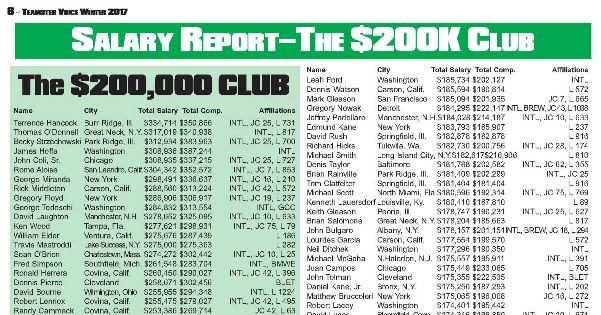 The $200,000 Club has 46 members, according to 2015 salary figures on union financial reports, and the vast majority are on the Hoffa-Hall payroll.

That may sound like a lot of money, but some want more, which explains why four $200,000 Club members were charged with embezzlement, racketeering, or taking employer payoffs—and a fifth is under investigation.

Most of them have repeatedly told members to take concessions, because times are tough—though the times don’t seem so tough in the $200,000 club.

One of them, Becky Strzechowski, was perhaps over-eager: her salaries of $312,934 exceed Hoffa’s salary by $3,998, a violation of the Teamster Constitution Article V, Section 1(a). She should have been as careful as her fellow Chicagoan, John Coli, who calculated his salary to come out exactly $1 under the maximum allowed.

This report is nonpartisan and as complete as possible. We have prepared these reports each year for 35 years; the reports have helped to bring salaries down to more reasonable levels. If you have questions, contact TDU.

We believe union officers should be compensated well for their work, but greed has no place in our union. Some in the $200,000 Club are hard-working officials or skilled attorneys, but others hold their positions despite a lack of qualifications or even when charged with employer payoffs.

One solution to bad allocation of union resources is an active, informed membership who stand for solidarity and reject greed. TDU is dedicated to this principle of membership education and involvement.

A key solution is to change the leadership at the IBT and rid the union of corruption, with transparency and putting dues money to work for the members.

Finally, if you agree that knowledge is power, and rank and file Teamsters need power, please join TDU, and help make it happen.
Where Does This Info Come From?

The Teamster Rank and File Education and Legal Defense Foundation (TRF) analyzed hundreds of LM-2 financial reports and IRS 990 tax forms for 2015, filed by locals, joint councils, conferences, and the IBT. The information is factual and nonpartisan, and includes every officer we have salary data for. Click here to find out how to access the LM-2 of your local union.