Pension Movement: “We Must Escalate!”

A crowd of over 500 Teamsters and retirees in Kansas City yesterday listened intently as Karen Friedman, Policy Director of the Pension Rights Center, told them “we must escalate our efforts to protect our pensions.“ 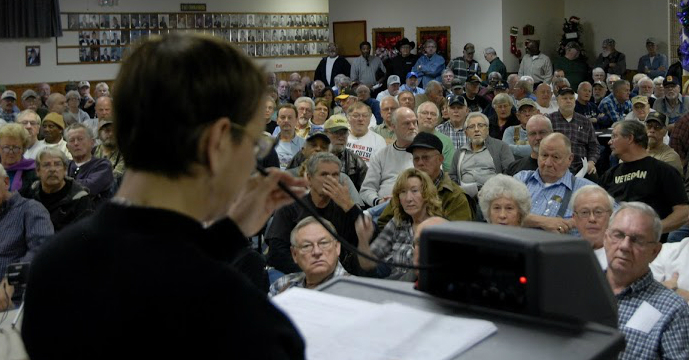 That escalation is happening now. The Missouri-Kansas City Committee to Protect Our Pensions meeting drew concerned Teamsters from up to 300 miles distant, and was one of a dozen such meetings in the past week.

Fred Zuckerman, the president of Local 89, presented an articulate argument for denying the Central States Proposal to Feinberg, and was joined in opposition by some 25 other speakers in Columbus. Zuckerman also submitted a comment to the Treasury Department that concerned Teamsters should read.

Pension Rights Center attorney Norman Stein submitted another comment which lays out the reasons for rejection.

Central States Trustee Bill Lichtenwald has meanwhile been traveling to sell the pension cut program to Teamsters, without much success. Yesterday at a Columbus Ohio retirees' meeting, he admitted that the Teamster officials who are trustees will not move to delay the cuts to allow time for better solutions.

Last Sunday, Lichtenwald was pressed by Cincinnati retirees to agree to make a motion to withdraw the benefit cut proposal, and he promised to do so. But just four days later, Lichtenwald told a packed hall in Columbus that he could not get any support from the Teamster trustees – who supposedly represent us!

Those Teamster trustees should either stand up for members and retirees or get the hell of the way by resigning. Teamsters have already demanded the resignation of Lichtenwald, who was slammed in the Independent Review Board’s report on corruption in the Ohio Conference of Teamsters, which he headed until his removal.

The growing movement to defend pensions will continue to demand that Central States withdraw their proposal and support efforts for a more positive solution.

The pension movement will continue to reach out and expand into new areas and build support from more allies.