Newest Member of the Teamster Board

March 26, 2012: Hoffa has appointed Becky Strzechowski as a Central Region International Vice President for the next five years. She will fill the vacancy created when Steve Pocztowski of Local 705 was elected in November, although he had passed away last July in Las Vegas, just days after he was nominated.

Strzechowski got her start in Chicago Local 727, headed by John Coli and run largely as a Coli family business. She was appointed to several positions, most recently as Assistant Trustee of Local 700, which was created by Coli by merging Local 726 and most of Local 714 together in 2010. She now serves as the local’s first secretary treasurer, the number-two post in the local. She is an attorney.

Strzechowski is closely allied with Coli, so her appointment strengthens his political power within the Teamster International. Her salary in 2010 was $210,290 and total compensation was $274,032. Her new post will add another $75,000 as well as an additional lucrative pension.

Ken Hall, who hopes to succeed Hoffa to the top spot, better watch his back. Coli has his own ambitions.

Hoffa has named International Vice President Rome Aloise the Director of the Dairy Conference, and also the Food Processing Division of the IBT. He replaced Fred Gegare, who retired at the end of 2011, after running for General President.

November 21, 2011: Not long ago, truckers pulled off highways across America and tuned in to someone whose CB handle was “Troublemaker.”

“I’m barely hanging on,” one driver lamented. His employer, the U.P.S. freight unit, was turning to nonunion drivers — people outside the International Brotherhood of Teamsters, he said.

Click here to read more at The New York Times.

November 21, 2011: Teamsters President James Hoffa is expected to win another five-year term heading one of the nation’s largest labor unions.

With most of the votes counted, election results show Hoffa garnering about 57 percent of the vote and challengers Fred Gegare and Sandy Pope splitting the rest.

How Can You Tell When Hoffa Is Lying?

October 21, 2011: Did you get a Hoffa Campaign Mailing? Did you get the big one in which Hoffa brags that he is keeping Mexican-based trucks from displacing US-based Teamsters?

It didn’t take long to prove that a lie. Yesterday trucks drove some 400 miles into the interior of the US, replacing US-based drivers with workers who get paid a lot less.

How do you know when Hoffa's lying? His lips are moving.

He can fool 10% of Teamsters, and get their votes. RIGHT NOW is the time for Teamsters who are tired of lies, excuses and secret deals to do one simple thing: talk with fellow Teamsters, and ask them to mail in the ballot for Sandy Pope.

October 20, 2011: 122,810 ballots have been returned in the election for Teamster President. And more are coming in every day.

You can download the new leaflet from the Sandy Pope campaign that thanks members for voting—and reminds members who haven’t voted to send in their ballots. 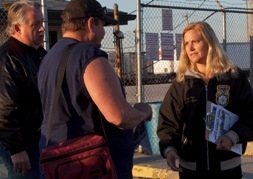 Sandy Pope is still on the campaign trail, meeting with Teamsters in southern New Jersey this morning. And across the country, members are still getting out the vote.

“I keep hearing the same thing: ‘I didn’t get a ballot,’” said David Thornsberry, UPS package car driver in Louisville Local 89. “We’re showing people how to get a replacement and we’re going to keep reminding people to vote.”

“This morning we campaigned at the North Syracuse schools bus garage parking lot. I was there about two weeks ago with a Teamster Voice bundle,” reports John DePietro, a member of Local 317 in Syracuse, N.Y.

“The real lesson here is the importance of follow-up campaigning. A lot of those bus drivers looked over the Teamster Voice that I handed out but needed a reminder to turn in their ballots.”

What are you doing to spread the word about Sandy Pope? Click here to send a message to TDU.

And that’s typical. In the 2006 election for Teamster President, two out of three votes were returned after the first week.

Sure, some ballots are in the mail and on their way. But hundreds of thousands of ballots are still sitting on kitchen tables. (A detailed chart listing returns by region is available here).

That means we still have work to do—passing out leaflets, making calls, sending texts, and reminding Teamsters to vote.

And it means Sandy Pope can win this election—by turning out our votes now, and keeping at it, long after the Hoffa campaigners have stopped.

What You Can Do Now

This election is in your hands—and concerned Teamster activists like you.

The Sandy Pope Campaign produced new leaflets you can use, including one for UPS part-timers.

Click here to let us know we can count on you to keep campaigning.

What To Do If You Did Not Get A Ballot

Ballots were mailed on Oct. 6. The Election Supervisor is now accepting calls from Teamsters who want a replacement ballot.

If you made a mistake marking your ballot or want to change your vote, call today and request a replacement ballot.

You cannot leave a voicemail message. You must speak with a hotline operator directly.

You will be asked for your name, local union and the last four digits of your social security number.

You cannot call on behalf of another Teamster. You can help your fellow Teamsters vote by sending them this information by text—or by calling the replacement ballot hotline and handing your phone to the Teamster who needs a ballot.

Teamsters are Out Campaigning for Sandy Pope!

October 7, 2011: Teamsters are turning out the vote for Sandy, and for real change in our union. 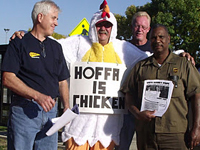 They're at the terminal and plant gates, making phone calls, sending texts, wearing their Sandy Pope gear, and talking Teamster to Teamster.

In St. Louis, Hoffa showed his true colors when he appeared—appropriately—in a chicken suit, as Teamsters leafleted with sample ballots for Sandy Pope. A few tried to choke him, but most were simply eager to get their ballot to vote the chicken out.

We know the support is there for real change in our union. But unfortunately many Teamsters don't vote. This means the side that turns out their votes will win. Now is the time.

Click here to send us a message and let us know what you’re doing to support Sandy Pope.

Click here to find out what you can do to help elect Sandy Pope.

The Power Is in Your Hands

October 6, 2011: Ballots mail out today to elect the next Teamster General President. Sandy Pope is the only candidate who can beat Hoffa and lead our union in a new direction.

How to Vote for Sandy Pope

Here’s how to cast your ballot for Sandy Pope:

Click here to download sample ballot flyers that you can use to show other Teamsters how to vote for Sandy Pope.

Click here to find out more ways you can help turn out the vote for Sandy Pope.

How Many Votes Do We Need to Win?

We know the support is out there. Unfortunately, many Teamsters don’t bother to vote. That means the side that does turn out its vote, wins.