Posted on Teamster Voice Articles by Teamsters for a Democratic Union · December 08, 2016 9:00 AM

More than 400 pilots and family members took the fight to preserve their livelihoods and security to the 2015 Berkshire Hathaway Shareholders Meeting by staging the largest informational picket in NetJets history on Saturday; NetJets is a subsidiary of the Warren Buffett-owned conglomerate (NYSE: BRK.A and BRK.B). The pilots, whose professional interests are represented by the NetJets Association of Shared Aircraft Pilots (NJASAP), were joined by NetJets flight attendants and Flight Options pilots represented by the International Brotherhood of Teamsters.

"In 2005, our pilot group conducted its first informational picket in Omaha during a Berkshire Hathaway annual meeting with 75 pilots sending the message there was a labor problem at NetJets," NJASAP President Pedro Leroux said. "Ten years later, more than 400 pilots and their families traveled from all points across the United States to communicate what we have today is not a labor problem – it is a labor disaster created by management."

November 25, 2014: United Airlines (UAL) professional aviation mechanics represented by the Teamsters Union held informational pickets at West Coast airports. United Airlines mechanics are informing the public that they may be forced to strike if the company refuses to keep its promise to reinstate the workers' pension plans. 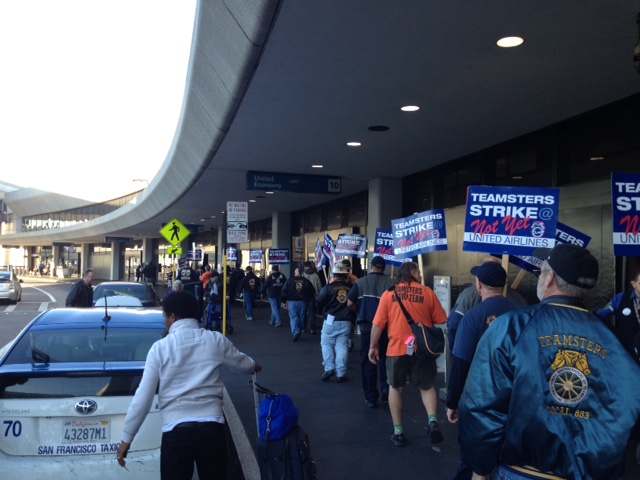 The protest comes as negotiations enter their 24th month, the last twelve having been overseen by the National Mediation Board. In 2010, United Airlines merged with Continental Airlines and the parties have attempted to amalgamate bargaining agreements representing aircraft maintenance and related workers from three different work groups (Continental, United and Air Micronesia).

The 11,000 Teamster mechanics are determined to defend their family health benefits and restore their pensions.

American Airlines passenger service agents have voted to be represented by a coalition of the Communications Workers of America and International Brotherhood of Teamsters.

AA’s agents, who staff the gates and counters at airports and handle reservations, had voted down the CWA in 2013, prior to the Dec. 9 merger of US Airways and American.

Click here to read more at The Dallas Morning News.

Voting ends today for American Airlines passenger service agents deciding whether to unionize, with results tomorrow. The vote is a result of the merger between American and US Airways, which created the largest airline in the world—and the largest union representation election in the U.S. this year.

The agents handle reservations, check in passengers and baggage, and staff airline gates. A third of them—the 5,500 US Airways agents—are already members of the Communications Workers (CWA). The 9,000 American agents have tried several times to unionize, losing their 2013 election by a heartbreaking 150 votes.

Updated December 2, 2013: Teamster mechanics who are without a contract picketed on November 25 at airports from throughout the country to demand an end to concessions and a contract. They were joined by AFA flight attendants who are also facing difficulties in their negotiations. Mechanics and Flight Attendants along with other workers have taken major concessions in previous negotiations in the last 10 years and they believe that they need to get gains as were promised by the company. We stand in solidarity!

The union said the DOJ litigation places the workers at American "in significant turmoil."  "American Airlines' emergence from bankruptcy has been cast into doubt and the union has determined that the continued conflict between labor organizations is not in the best interest of the workers," Teamsters spokesman Bret Caldwell said in a statement. More than 6,000 American Airlines mechanics and related personnel signed cards to make the Teamsters their bargaining representative, the union said.

The Transport Workers Union, which currently represents American mechanics, said it is pleased the Teamsters realized its "raid" of TWU members was "wasteful and divisive."  TWU says it will focus on fighting DOJ suit. "Now that we do not have the distraction of an unnecessary campaign among already organized workers, we can redouble our efforts on battling the Department of Justice's unjustified legal challenge to the proposed merger of American Airlines and US Airways," TWU International President James C. Little said in an Aug. 16 email. Little said the combined airline will protect "good-paying U.S. jobs and benefit consumers by creating a real alternative to the Delta/United duopoly."

The Teamsters filed a petition and authorization cards May 28 with the National Mediation Board for an election to represent American mechanics and related workers. The union earlier said a majority of American Airlines mechanics in the bargaining unit at 14 hubs had signed cards for Teamster representation.

In July, TWU filed objections with the NMB to the Teamsters representation election, alleging that an IBT organizer forged authorization card signatures of workers. The Teamsters denied any wrongdoing in securing the signatures of workers petitioning for a representation election. TWU officials have accused the Teamsters of carrying out a "campaign of misinformation" and making promises it has not been able to fulfill at other carriers.

The Teamsters also lost a bid to represent 4,600 mechanics at US Airways. The bargaining group voted Aug. 12 to continue to be represented by the International Association of Machinists rather than switching to the Teamsters.

The International Brotherhood of Teamsters has dropped its bid to recruit about 12,000 aircraft mechanics and other personnel at American Airlines, marking the end to what had become a bitter fight between unions. Their battle to wrest control from the Transport Workers Union was marred by accusations of forged signatures and misrepresentations on both sides, and the strange distribution of airplane vomit bags to make a point.

The Teamsters cited the recent announcement that the Justice Department will fight a proposed merger between American Airlines and US Airways as their reason for dropping the battle. But the announcement comes just a few days after the union lost an election to represent 5,000 mechanics at US Airways in another divisive battle.

"American Airlines' emergence from bankruptcy has been cast into doubt and the union has determined that the continued conflict between labor organizations is not in the best interest of the workers," Teamsters spokesman Bret Caldwell said in a statement. "This is not a time for workers to fight among themselves."

As national membership has dwindled, fights between labor unions have intensified as they vie for a shrinking number of members, and the dues that come with them. One Transport Workers local in Tulsa whose members the Teamsters were trying to recruit, for example, collected $2.3 million in dues last year.

Some in labor have criticized the Teamsters for spending money to recruit workers who already belong to a union, rather than the millions of unorganized workers in the U.S.

The Transport Workers Union had also accused the Teamsters of forging signatures, an allegation the National Mediation Board was investigating, delaying the election. The Transport Workers didn't seem ready to kiss and make up Friday. In a statement about the Teamsters' decision to withdraw, Donald M. Videtich, a Transport Workers Union representative, wrote that the "The TWU has maintained the IBT's filing was flawed and should not be moved onto a vote by the NMB. The IBT's decision to withdraw is a strong signal the work done by the TWU and the position we took was correct."

The Transport Workers are now focusing their efforts on making the American Airlines-US Airways merger happen. The union is asking members to push U.S. Atty. Gen. Eric Holder to drop the Justice Department lawsuit against the merger.

"The Department of Justice through its legal maneuvers is trying to create a duopoly where United and Delta would dominate commercial aviation in the United States and other carriers would be kept at a competitive disadvantage or relegated to being niche players," Transport Workers chief Gary Drummond said this week.

That may be one point on which the Teamsters agree. In the Teamsters statement today, a spokesman said the government attempt to stop the merger "places the workers at American Airlines in significant turmoil."

The International Association of Machinists and Aerospace Workers said Monday that US Airways mechanics and related employees voted overwhelmingly to retain the IAM as their bargaining representative.

The IAM said 1,903 members, or 58 percent of all votes cast, preferred the IAM, to 1,418 votes for the International Brotherhood of Teamsters, or 42 percent.

"This victory marks an important milestone for the Mechanic and Related group at US Airways," IAM Transportation vice president Sito Pantoja said in the IAM's announcement.

"By voting for the Machinists union, our members safeguarded their pensions and seniority heading into the merger with American Airlines while rejecting the empty promises of an organization with a history of corruption," Pantoja said.

While the Teamsters appear to have lost the US Airways campaign, they still have a similar effort underway at American Airlines. American's mechanics and related employees are currently represented by the Transport Workers Union.

The TWU filed affidavits from two people who were involved in the Teamsters efforts to say they had heard of signature forging going on by organizers. The Teamsters have asked to have until Aug. 23 to respond to the accusations.

Here's the count from the National Mediation Board:

August 22, 2013: Teamsters at UPS, UPS Freight and ABF have questioned their contract voting procedures, but consider the crap which 2,000 Teamster flight attendants have been fed.

Their contract was deemed "ratified" on July 31 by a vote of 646-440 under these conditions:

The ballots were to be returned in a single envelope, and no name or ID was required on it. Anyone with an envelope and ballot could mail in one, two or many ballots.

The ballots could easily be read by holding the envelope up to the light.

Hundreds of members did not get a ballot, and when they requested one, were told No.

No impartial monitor or observer was used for the count.

Complaints to Local 135 (which represents all 2,000) and the Airline Division director were ignored.