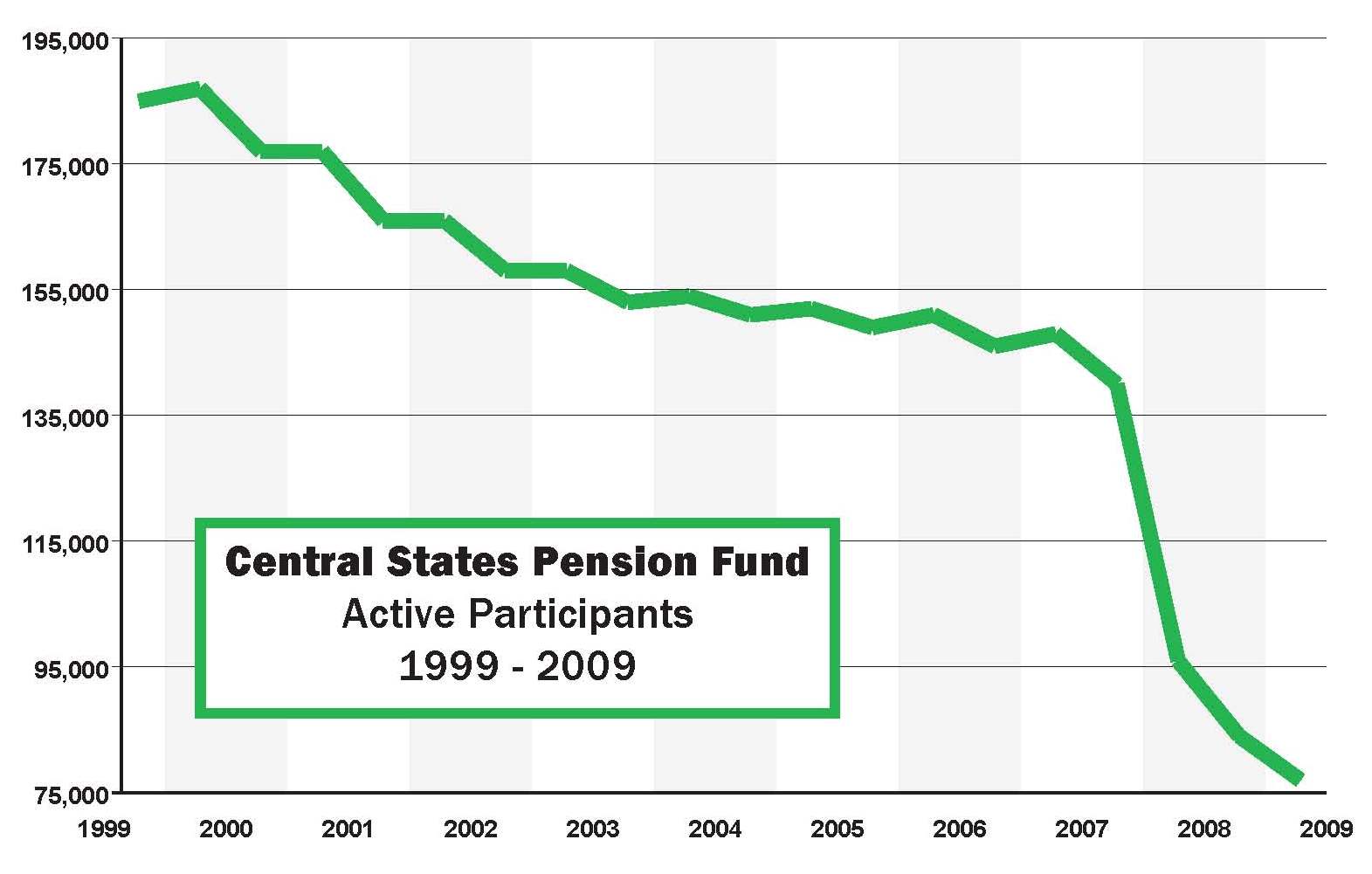 The number of participants dropped sharply in December 2007 when Hoffa let UPS pull 44,000 Teamsters out of the fund. During Hoffa’s tenure, an additional 64,000 members were lost.

In addition, the number will fall further, with the temporary withdrawal of YRCW from the fund.

The number of retirees has remained steady at about 212,000 for the past six years.

The answer lies in defending our contracts and pension plan, and new organizing to strengthen our union and pension fund.

September 11, 2009: YRC is saving $40 million per month by not paying into any Teamster pension fund on its 35,000 Teamster employees. This concession is aimed at keeping YRC afloat, and its hard-working drivers, dockhands, mechanics and office workers on the job.

But that same saving for YRC means a $500 million annual deficit in payments to Teamster pension funds. Some, like the Western Conference Fund, can absorb the loss because of a good funding level and because YRC represents a small fraction of that fund’s income.

Some other funds are being badly hurt. The Central States Fund is heavily dependent on YRC’s contributions, because the International Union let UPS pull out in December 2007. With YRC not contributing, Central States’s annual employer contribution stream now stands at $702 million per year, but its benefit pay-out stream is $2.734 billion per year.

That means Central States takes in $1 for each $3.89 it is paying in benefits, and must make up the difference on its investments, which is highly unlikely.

Some smaller pension funds in the East are also heavily hit by YRC’s temporary withdrawal from pension funds, such as the New York Local 707 fund and the Baltimore Local 557 fund.

Thus the YRC concessions, which are designed to save jobs, also are putting some Teamster pension funds, and future Teamster retirees, in a world of hurt.

September 11, 2009: A review of the second quarter Financial and Analytical Report of the Central States Pension Fund shows that assets are up, but its problems continue.

Central States has also slightly amended its ‘reemployment’ rule which will help some over-65 retirees.

As of June 30, CSPF assets stood at $17.5 billion, almost exactly the same as the $17.4 billion in assets at the start of 2009. The fund made 15.0 percent on its investments in the second quarter, thanks to the big run-up in the stock market. Central States now holds 69 percent of its assets in stocks and 28 percent in bonds.

Most Teamster leaders agree now in private that Hoffa’s big giveaway was a disaster: allowing UPS to take 44,000 full-timers, most of them young, out of the union plan.

The new problem for the fund is Yellow Roadway Corp. YRC was allowed to defer six months of past-due payments, amounting to about $125 million that it owes the fund. The fund, along with some other Teamster funds, now holds a lien on 150 terminal properties of YRC as collateral.

YRC is required to start paying back the deferred amount in January 2010, over a three year payment period. Even worse, YRC is now terminated from the fund for 18 months, and thus not liable to make pension contributions until January 2011.

The Central States Financial and Analytical Report is available only at www.tdu.org.

In August the fund made a change in its reemployment rules, which generally bar retirees from working in Teamster core industries or in a field similar to their prior Teamster work.

Retirees older than 65 who have not worked in their Teamster work or any employment barred under the rules for one year, can now take any job and draw their pension.

The change will not help retirees under 65, but some over 65 will now be given more latitude to work, including in truck driving, while drawing their pension.

Now many are facing more years on the job than they ever expected.

On Aug. 4., the Local 557 Pension Fund announced drastic cuts for Teamsters taking early retirement after Sept. 4. (The Teamsters are members of Local 355, but they kept their own pension fund after their locals merged.)

Before the cuts, members with 30 years of service could take an unreduced pension at age 55.

“I was one year short of the Sept. 4 deadline,” said Luther Clark, a 31-year Teamster in Local 355. “I was planning on retiring next year. Now I’m looking at ten more years in the truck.”

These cuts are possible because the fund is in the Red Zone.

This is the second year in a row that Local 355 officials have cut benefits for Baltimore Teamsters. Last year, Local 355 President Denis Taylor froze the pension in the largest Local 355 plan, a fund that covers Teamsters at UPS, Sysco, US Foods, but not freight and carhaul.

Hundreds of Teamsters signed a petition against the cuts, and this year, their plan ended the freeze and restored a small pension accrual.

Both times, Local 355 Teamsters were left in the dark about the problems with their pension funds.

“We only found out our fund was in trouble when they announced the cuts,” Clark said. 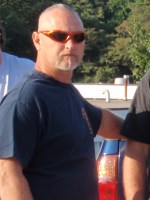 I Thought I Only Had One Year to Go

“We only found out our fund was in trouble when they announced the cuts.”

“I was one year short of the Sept. 4 deadline. I was planning on retiring next year. Now I’m looking at ten more years in the truck.”