Anatomy of a Turnaround: YRC Worldwide

This is the first in a series of six articles about the volatile financial misfortunes and turnaround of trucking company YRC Worldwide. See parts two, three, four, five and six.

If there were a Comeback Player of the Year award for corporate performance, YRC Worldwide might have taken home the trophy for 2014. Not that the $5 billion trucking company is now a superstar — far from it. Rather, such recognition would be testimony to how low YRC had sunk.

After years of finance jockeying that barely kept the company from tripping into bankruptcy, its footing is relatively secure now. A smorgasbord of entwined elements converged in the rescue: a new labor deal, a deft debt restructuring, an equity offering that allowed for debt paydown, an operational downsizing, the improving economy, and plain luck.

In Most States, Trucking is the Most Common Job

This gives our union leverage; it's time to use it: "Driving a truck has been immune to two of the biggest trends affecting U.S. jobs: globalization and automation. A worker in China can't drive a truck in Ohio, and machines can't drive cars."

Click here to view the interactive map and read the full story.

Trucking giant YRC Worldwide Inc. on Thursday reported a $6.2 million profit in the final months of 2014 as its national freight business turned in stronger operating results.

The fourth-quarter profit compared with a $400,000 profit in the same quarter a year earlier.

Click here to read more at The Kansas City Star.

Drivers misclassification lawsuit ruling is a win for Teamsters

Posted on Media by Teamsters For A Democratic Union Tdu · February 02, 2015 10:21 AM
Peter Tirschwell
The Journal of Commerce
February 02, 2015
View the original piece
A Superior Court judge on Thursday ruled that seven drivers working for Pacer Cartage at the ports of Los Angeles and Long Beach are employees and are owed a total of more than $2 million in damages.
The ruling was a victory for  labor activists and the International Brotherhood of Teamsters who see misclassification of drivers as their latest opportunity to unionize the port drayage labor force. But the ruling, coming after two years of legal maneuvering, underscored the expensive and time-consuming nature of the Teamsters’ strategy, under which trucking companies have to be challenged individually in court. Thus, there should be caution in assessing the implications of this particular victory for the broader Teamsters strategy.
Yet that is the strategy the union is resorting to after earlier efforts, such as a Port of Los Angeles plan to require that truckers calling at its terminals be employees as part of an overall environmental initiative, proved unsuccessful. That is why some see the Teamsters as waging an uphill battle to unionize the U.S. drayage labor force, at least in union friendly states such as California, and thus potentially be in a position to exercise the type of powerful leverage over trade enjoyed by highly paid longshore labor workers such as members of the International Longshore and Warehouse Union.
According to a report in the Torrance, California, Daily Breeze, Judge Jay M. Bloom ruled Pacer had an employer-employee relationship with the truckers and thus owned them the same benefits and protections as it offers to employees, including health care, overtime pay and sick leave. He ordered Pacer to pay the seven drivers damages ranging from $85,632 to $387,936. The key determinant in an employment relationship is whether the worker has control over his or her activities.
“This case sets the stage for all the other cases that are pending,” the drivers’ attorney, Alvin Gomez, said at a news conference Thursday, as reported by the Breeze. “Now, every truck company is put on notice that if they have a similar scheme in place, (they) are in willing violation of California law.”
“From the evidence, it appears that Pacer had the control,” the judge’s decision stated.
XPO Logistics, the parent company of Pacer Cartage, and Harbor Rail Transport, another local drayage unit, said they would appeal the ruling, the Breeze reported.
“We believe the drivers in question are properly classified as contractors, and that this case is without merit,” the company said in an e-mailed statement to the Breeze.

Driver turnover remained at elevated levels for truckload fleets of all sizes, inching up one percentage point to 97% at larger carriers and remaining at 94% at smaller fleets, American Trucking Associations reported.

The numbers compared to the second quarter of last year showed sequential stability in both the truckload fleets with revenue of more than $30 million and those with revenue below that benchmark.

A Dec. 18, 2014, memo obtained by theKansas City Business Journal, details a change-of-operations request to the International Brotherhood of Teamsters that would allow the company to increase its use of interline carriers — third-party transportation providers — in areas currently served by YRC Worldwide Inc.employees.

Smart Lines, which primarily serves the food, energy and industrial sectors, has 24 employees and generates about $18 million in annual revenue, ABF said.

ABF Logistics is the third-party logistics arm of ArcBest Corp. and a sister company to less-than-truckload carrier ABF Freight.

“The purchase of Smart Lines Transportation Group is an important step in our strategy to grow the emerging businesses at ArcBest and provide a variety of supply chain services to our customers in the way they expect,” ABF Logistics President Jim Ingram said in the Jan. 5 statement.

Greg Roush, Smart Lines’ founder and former president, is now branch director for the Oklahoma City location, which is officially operating under the ABF Logistics name.

ArcBest, based in Fort Smith, Arkansas, ranks No. 13 on the Transport Topics Top 100 list of the largest U.S. and Canadian for-hire carriers.

January 5, 2015: The YRCW Board of Directors, including two nominated by James Hoffa, has handed the top two executives a $10 million bonus. 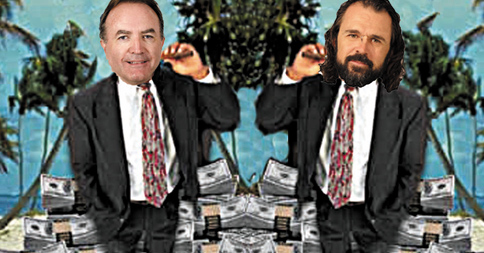 “What happened to ‘equality of sacrifice’” asked Frank Fullerton, a YRC road driver out of Local 728 Atlanta. “This is a slap in the face to every YRC employee and retiree, who has given up wages, pensions and vacations. And the IBT goes along – one more reason to dump Hoffa for a new leadership.”

The YRCW board terminated and then rehired CEO James Welch and Chief Financial Officer Jamie Pierson. This gimmick let them collect a severance package that included stock due to their “termination.” The board claimed they needed a more “traditional compensation package” going forward.

Welch was awarded a severance package that included stock shares worth $6.2 million at current valuation and Pierson received stock worth about $4 million. The filing with the Security and Exchange Commission (SEC) did not report whether salaries were changed under the new agreement, but the “traditional compensation” surely means a fat raise. In 2013, Welch got $2,170.630 and Pierson got $1,999,223. YRC’s drivers, dock workers, clerks and mechanics would also like a “traditional compensation” package!

UPDATED January 5, 2015: YRCW has issued a response to media reports on the two execs which states in part that, “The CEO and CFO did not receive any severance pay in association with the cancellation of their employment agreements; they simply entered into severance agreements that would dictate terms in the event a termination happened at some point in the future.” So it appears those severance payments are delayed.

According to a Securities and Exchange Commission filing late Friday, the less-than-truckload carrier (Nasdaq: YRCW) announced that the company's board approved termination of Welch and Pierson's current employment agreements to grant them a new, more competitive package in 2015.

2014 Was a Happy Year for Transport Stocks

Transports Give a Little Back in December, with Some Signs of Mean Reversion. Our WR Transport index fell 0.7% in Dec. and slightly underperformed the S&P 500 for the first time in 4 months. TL stocks continued to outperform as the clearest winners from lower fuel (i.e. stronger consumer and net fuel savings), while LTL and Express stocks lagged the most. Asset-light stocks (UACL, RRTS and FWRD) outperformed last month after lagging earlier in the year, but LSTR was the worst transport stock in Dec. after strong gains earlier in the year.

But Transports Still Strongly Outperformed in 2014. Our Transport index was up 20% in ‘14, outperforming the S&P by more than 800bp and trailing only Utility and Health Care sector performance for the year. TL and LTL stocks were by far the best (8 of the top 9 stocks in our coverage were trucking stocks), followed by the Rails, Express carriers, Freight Forwarders and lastly the Truck OEM’s. Our best performing transport stocks were CVTI, KNX and SAIA, while our worst stocks were UTIW,RRTS and NAV.

A Look Ahead with Our Top Transport Stock Ideas for 2015: Rail and Truck capacity remain very tight, so pricing should be very strong this year and we believe Transport stocks can continue to outperform to begin the year. We believe TL remains best positioned entering the year, and our favorite TL stock is SWFT. While crude-by-rail has become a risk, we still expect CP to show the best EPS growth among the Rails this year, while FDX should benefit from lower costs and stronger Express vols in a lower fuel environment. WAB remains our favorite multi-year growth story, and our best special situations idea is UTIW as a potential turnaround or take-out story.