New labor board will keep bosses from stalling union elections

The National Labor Relations Board finally issued its long-in-the-works rule speeding up union representation elections. Currently, employers can drag out the election process by withholding information from organizers and with frivolous lawsuits, time they often use to intimidate and coerce workers away from union support.

The new rule, set to take effect on April 15, will cut waiting times between when an election is set and when it happens, put off litigation—often filed by businesses to drag out the election process—until after the election, allow election petitions to be filed electronically (hi there, 21st century!), require businesses to share additional worker contact information with union organizers, and consolidate the post-election appeals process.

A group of 74 drivers and dockworkers at Con-way Freight in Miami Lakes, Fla., voted today to join Teamsters Local 769 in North Miami, Fla.

“The Con-way workers have taken a bold step today to improve their lives and have a more secure future as Teamsters,” said Mike Scott, President of Teamsters Local 769. “As we have seen across the country, the company spent lots of money to wage a vicious anti-worker campaign, but the workers remained strong and united and didn’t let management’s bullying get to them.”

It's Going To Get A Little Easier For Workers To Unionize

WASHINGTON -- Federal officials unveiled new rules on Friday that will streamline and simplify the union election process, a reform long sought by labor unions and fiercely opposed by businesses.

Among other changes, the rules issued by the National Labor Relations Board will limit some of the litigation that can precede a union election, making it harder for parties to stall or drag out the process. The reforms will also allow unions to file election petitions and other documents via email, and they will require employers to provide unions with the email addresses and phone numbers of workers eligible to vote.

Many employers favor the older, slower election process, as it gives them more time to dissuade workers from unionizing. The reforms announced Friday have long been discussed and debated, and businesses have argued that they would infringe on the businesses' free speech rights and lead to "ambush" or "quickie" elections.

The labor board -- or at least its left-leaning majority appointed by President Barack Obama -- disagrees. In a statement Friday, the agency said the changes would "modernize" procedures and allow it to "more effectively administer" the laws on collective bargaining. In a sign of the partisan divide at play, the rules were approved by the board's three liberal members, while its two conservative members dissented.

Labor groups have long bemoaned the current process as outdated and tied up with red tape, giving employers ample time to bust unions. Companies often dispute which workers should belong in the bargaining unit -- that is, the people who would be covered by the union contract -- and the reforms announced Friday will shift that litigation to after the election. Employers will also have to prove that a review of the election is warranted, as opposed to merely requesting one.

Mark Gaston Pearce, the labor board's chairman, said in a statement that he was "heartened" that the board is enacting the amendments.

"Simplifying and streamlining the process will result in improvements for all parties," Pearce said. "With these changes, the Board strives to ensure that its representation process remains a model of fairness and efficiency for all."

The rules were announced in the Federal Register on Friday and will go into effect on April 14, 2015.

The board put forth a similar batch of rules more than three years ago, drawing heat from various business lobbying groups as well as congressional Republicans. After a federal court ruled that the board had lacked a quorum when it issued them, the board formally withdrew those rules early this year. It had been expected to reissue similar rules now that it has five confirmed board members.

Richard Trumka, president of the AFL-CIO labor federation, applauded the announcement of the rules Friday.

"The modest but important reforms to the representation election process announced today by the National Labor Relations Board will help reduce delay in the process and make it easier for workers to vote on forming a union in a timely manner," Trumka said in a statement.

Meanwhile, the National Retail Federation, an industry lobby, said it was considering "both a legal and legislative strategy" to block the rules from going into effect, calling them "the latest attempt by the Obama Administration to aid their allies in Big Labor at the expense of employers and employees."

Republicans in Congress have already held hearings on what they deem the "ambush" election rules and may well hold more once the GOP takes control of both chambers next year. They could potentially try to block the rules from going into effect -- though not in the immediate future, since members of Congress are already far along in hammering out a deal this week to fund the government. By waiting to release the rules Friday, the labor board may at least have avoided a GOP-sponsored rider in the spending bill that could gut the rules.

Supporters and opponents of banning the city’s horse drawn carriages battled at dueling rallies Monday as the bill was finally introduced in the City Council - and more Council members came out against the controversial ban.

A dozen unions joined horse carriage drivers on the City Hall steps to blast the proposal they say will kill the livelihoods of 300 drivers. 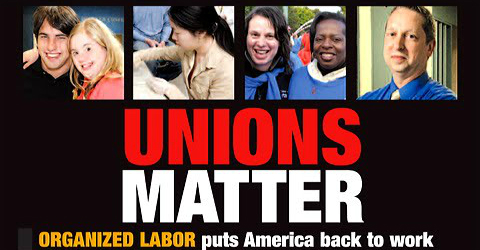 Retirees, Watch Out: Detroit May Become Blueprint for Other Cities

Here’s what’s really being missed in most snapshot explanations of Detroit’s bankruptcy: the unprecedented hit being taken by retirees who believed that, after working throughout their lives, they would be secure in their old age.

And Detroit sets a dangerous precedent. Your city’s retirees may be next in the crosshairs.

December 1, 2014: Walmart workers and allies ramped up the pressure for $15-an-hour with protests across the country.

Walmart workers held pickets, rallies and walk-outs at more than 1,600 stores nationwide on the biggest shopping day of the year. Some workers fasted and risked arrest to highlight their demands for $15-an-hour and full-time work at Walmart, the nation’s largest employer. In Washington, organizers reported protests at 64 stores—every store in the state.

Click here to read more from protesting Walmart workers and see a survey of the protests.

Click here to read more at The National Law Review.

Workers from stores all over California sat down in two Walmart stores in Crenshaw and Pico Rivera, both near L.A., blocking cashier’s lanes and store aisles. They placed tape over their mouths to protest what they say are the company’s illegal efforts to silence those who are calling for better jobs.

November 20, 2014: The 222 city and road drivers at the big Charlotte terminal voted Yes for the Teamsters Union in an NLRB election. It’s the largest union win at FedEx Freight to date, and brings the number of Teamster-represented FedEx Freight workers to about 400.

Congratulations to the FedEx Freight brothers and sisters, and to Local 71. 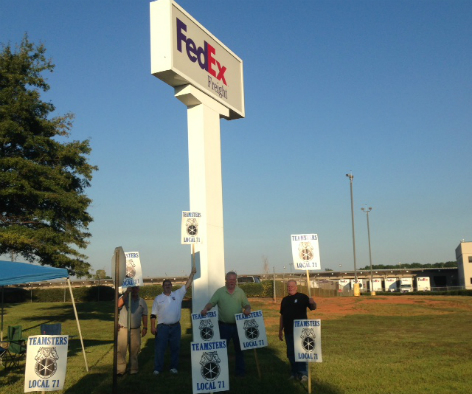 The IBT press release on the vote is here.

Over 70 University of Pennsylvania security guards, custodians, housekeepers, and their supporters rallied together on June 2nd on UPenn's campus to protect their benefits and win fair wage increases to keep up with runaway inflation.