September 3, 2010: The International Brotherhood of Teamsters extends its deepest condolences to the families of the crewmembers that lost their lives in today’s crash of a UPS 747 in Dubai.

The crash took place 18 miles from Dubai International Airport after reportedly suffering an onboard fire. The International Pilots Association is coordinating with the NTSB and UPS for the ongoing investigation.

“Our union mourns the loss of the crewmembers in today’s tragic crash,” said Teamsters General President James P. Hoffa. “We stand ready to offer whatever support we can to the families of the victims and to the International Pilots Association during this difficult time.”

September 3, 2010: DUBAI, United Arab Emirates (AP) -- A UPS cargo plane with two crew members on board crashed shortly after takeoff Friday outside Dubai, officials said. The state news agency WAM, quoting the General Civil Aviation Authority, reported that the "bodies of two pilots" had been found at the scene, but UPS did not confirm that. The plane went down inside an Emirati air base near a busy highway intersection about 10 miles (16 kilometers) southeast of Dubai's international airport. WAM said the crash occurred in an unpopulated desert area, suggesting there may not have been casualties on the ground.

Read the full story from the Associated Press here.

Sandy, the President of Teamsters Local 805, talks about saving our pensions, organizing the unorganized, and the power of union democracy in her interview with Ed Ott, the former Executive Director of the Central Labor Council in New York.

Click below to watch the video. You can fast forward to 1:34 in the video where the interview with Sandy begins. 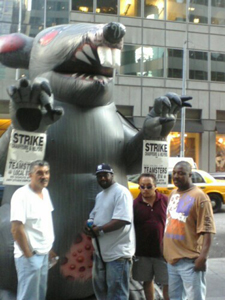 International action to back UPS workers in Turkey

September 1, 2010: Transport workers across the world are holding a day of action to ram home the message to UPS managers that the sacking of 157 workers in Turkey will not go unnoticed.

The workers were dismissed following an organising drive by the ITF-affiliated union Türkiye Motorlu Tasit Isçileri Sendikasi (TUMTIS); on 2 July, the conflict escalated in Izmir when it was reported that the manager of a UPS sub-contractor pulled out a gun and started shooting at protesting workers.

August 31, 2010: The prospective new owners of The Philadelphia Inquirer and the Philadelphia Daily News saw continued pushback from some of the newspapers’ unions Monday as a second group of employees voted Monday against a new labor contract.

The newspapers’ pressmen, represented by a Teamsters local, voted 74-9 to reject the offer, the Philadelphia Inquirer reported Tuesday. The thumbs-down on that proposal follows Inquirer and Philadelphia Daily News machinists’ rejection on Sunday of a separate contract offer.

Striking worker: 'I could lose the house, everything over it'

August 30, 2010: It is an anxious weekend for hundreds of families who've now been told they no longer have medical coverage; ongoing fallout from the strike involving workers at Coca-Cola distribution centers.

The Teamsters Union says they went on strike because the company wanted to eliminate health care for retirees and make workers pay more out of pocket for benefits.

Click here to read more at the Komo News.

August 27, 2010: A federal judge has upheld all elements of the Port of Los Angeles’ clean air program, including a controversial provision that bans independent truck drivers and requires them to be employees of companies that have obtained concessions.

500 Coca-Cola workers in Washington on strike

August 24, 2010: Some 500 employees of Coca-Cola in Washington state have walked off the job and are on strike, according to a company official.

The disgruntled workers, who are members of six local chapters of the Teamsters, said the company has failed to bargain in good faith with employees, resulting in a deadlock in negotiations, which began in April. The workers have been working without a contract since May 15, when their last contract expired.

August 19, 2010: The battle over the employment status of drivers at FedEx Ground moved to Massachusetts this week as 31 current and former drivers sued the carrier, alleging improper classification.

The suit, filed in U.S. District Court in Boston, seeks class-action status. Plaintiffs contend FedEx exerts enough control over its drivers to consider them employees rather than independent contractors. FedEx controls the days the drivers work, enforces appearance and vehicle standards and monitors performance. The suit seeks monetary damages as well as an injunction changing the independent contractor classification.

Click here to read more at The Journal of Commerce.

The History of Pension Protection

Until ERISA (the Employee Retirement Income Security Act) was passed in 1974 and signed by President Ford, workers’ pensions were unprotected. How was ERISA won, and what can we learn for today from this history?

The Carhaul Division briefed local union officers today at a meeting in Romulus, Mich. on the details of a proposed new contract. Now it’s up to the members. Read the proposed contract here and get information on upcoming contract briefings.