August 18, 2010: In an unexpected role reversal, the leaders of Teamsters Local 377 are facing accusations of unfair- labor practices from the local union hall’s two employees.

The conflict has resurrected political tensions at the union, which has been plagued by infighting for several years.

August 17, 2010: The Laborers' International Union is rejoining the AFL-CIO five years after leaving in a bitter dispute that split the U.S. labor movement.

The 800,000-member laborers' union represents workers in the construction industry.

AFL-CIO President Richard Trumka says the move is an important step in helping organized labor become more unified. Mr. Trumka has also reached out to Teamsters President James Hoffa about making a return to the AFL-CIO, and said in a recent interview that he'd be pleased if Change to Win re-affiliated with the AFL-CIO.

Can union vote at Delta help organized labor take off?

August 16, 2010: As Delta Air Lines workers prepare to vote in massive union representation elections later this year, labor leaders say wins at the company could influence organizing around the Atlanta area and the South.

“Delta is an icon in Atlanta,” said Patrick Scott, who works with the AFL-CIO-organized ATL Solidarity Committee, a coalition to support union efforts. The Delta elections will “set the tone” for other unionization campaigns, he said.

Click here to read more at the Atlanta Journal-Constitution.

Day of Solidarity in Connecticut

August 13, 2010: A convoy of beer trucks with horns blaring and Teamsters drivers flashing the thumbs up would not normally bring a lump to the throat and a tear to the eye. Then again, the scene at Hartford Distributors Inc. on Wednesday morning was not just another day at the warehouse.

It was a remarkable moment of unity, all the more so because it was one of three memorable events happening at the same time around Connecticut that galvanized union workers.

The defection of Tom Keegel, Hoffa’s running mate, from the Hoffa re-election campaign has sent shock waves through the Teamster political scene. 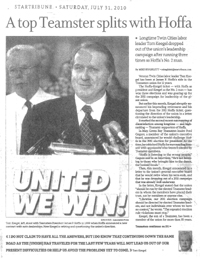 In a July 15 letter to the General Executive Board, Keegel distanced himself from Hoffa, and criticized Hoffa’s direction and isolation from local officers and members. He plans to serve out his term and then retire in early 2012.

The letter states that “continuing down the same road as the IBT has traveled for the last few years will not lead us out of our present difficulties or help us avoid the problems yet to come.”

While respectful in tone, Keegel indicates that he will have more to say on the union’s problems, and “that time will come soon enough.”

The letter goes on to criticize Hoffa for listening to his appointees rather than local officers, and for having those same appointees run his reelection campaign.

Hoffa-Keegel Petitions in the Dumpster

As a result of Keegel’s bombshell, the Hoffa campaign had to ask the Election Supervisor to let them withdraw thousands of petitions circulated by local officials to accredit the Hoffa-Keegel slate. Stickers, buttons and other campaign paraphernalia also made the trip to the dumpster.

Hall, as the Parcel (UPS) Division Director, has been behind key decisions that have created rifts in the Hoffa camp and alienated many Teamster local officers and members.

In late 2007 Hoffa and Hall signed a contract allowing UPS to pull all its participants from the Central States Pension Fund, leaving that fund greatly weakened, and putting UPS Teamsters into a company fund with benefits far below most Teamster plans.

The contract concessions were regarded as part of a deal with UPS to gain union recognition for UPS Freight employees. However, those employees were not put under the National Master Freight contract or into Teamster benefit funds.

Since that time, contract enforcement has gone downhill. UPS has eliminated thousands of full-time jobs which are guaranteed under the contract, but Hoffa and Hall have refused to hear any grievances about it at the national panel.

The Hoffa campaign has refused to comment on Keegel’s critical letter or his defection from the camp.

They pulled down the campaign website for two weeks until it reappeared with Ken Hall on it, without any comment on the switch.

All Teamsters to Vote

Nominations for General President, General Secretary-Treasurer and all Vice President positions will be held at the IBT Convention in late June 2011, and the mail ballot election of all 1.3 million Teamsters will be in November 2011.

Fred Gegare is at present the only other declared candidate for General President. He is also circulating accreditation petitions, along with three running mates for vice president positions.

Teamsters for a Democratic Union (TDU), the reform movement which previously backed the campaigns of Tom Leedham and Ron Carey, has not yet put forward or endorsed a candidate.

See www.TDU.org for updated information on the IBT election as well as to read Keegel’s letter and other materials.

In Ferguson v. New Prime, Inc., Ferguson, a leased driver for Prime, was fired shortly after she refused to drive through Donner Pass in the Sierra Nevada Mountains with a loaded tractor-trailer set during hazardous weather. Paul Taylor of the Truckers Justice Center filed a claim on behalf of Ferguson with the Department of Labor. Prime alleged that it fired Ferguson because she operated the truck at a deficit.

Near Reno, Nevada on Christmas, 2008, Ms. Ferguson observed hazardous driving conditions as she drove. After consulting other drivers, listening to radio weather reports and receiving reports from the state authorities advising against travel, Ferguson advised Prime via Qualcomm that she was not going to drive through Donner Pass until weather and driving conditions improved. When her dispatcher, Jeremy Thomas, read the message he told her "why didn't you cross it [Donner Pass] yesterday? You should have been across the country twice by now." A few days later Thomas recommended that Prime fire Ferguson, which management did.

Judge Leland found that Prime violated the Surface Transportation Assistance Act, which prohibits trucking companies from firing drivers for refusing to drive in violation of commercial vehicle safety regulations. Judge Leland held that Ferguson's refusal to drive was legally protected because violations of DOT regulations would have occurred but for Ferguson's refusal to drive in the hazardous weather. Judge Leland credited Ferguson's testimony noting that she properly relied upon reliable reports of bad weather and unsafe driving conditions through Donner Pass. In finding that Prime fired Ferguson because of her refusal to drive in hazardous weather, Judge Leland relied on an "incident report" prepared by Thomas noting that Ferguson refused to drive through Donner Pass and recommending that she be fired.

Click here to order a copy of the STAA Handbook.

October 27, 2009: The Department of Transportation has agreed to abandon its defense of longer working hour standards for truck drivers issued in 2003. This could possibly lead to a return to the ten-hour daily driving limit, though there is no guarantee of that outcome.

Click here to read the press release from Public Citizen.

October 1, 2009: The Obama administration will ban texting by truck drivers and restrict the use of other in-cab technologies as part of its effort to eliminate distracted driving, Transportation Secretary Ray LaHood said Thursday.

LaHood, at the conclusion of a two-day hearing here on ways to combat driver distractions, said the Department of Transportation would “ban text messaging altogether, and restrict the use of cell phones by truck drivers,” as one of a series of steps aimed at reducing highway deaths.