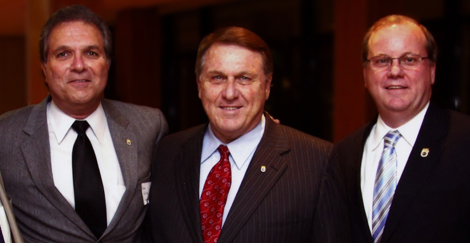 Aloise was charged by the Independent Review Board and found guilty of all charges on October 24, 2017.

The 122-page report on the charges details how Aloise solicited tickets to an exclusive Super Bowl Playboy party from an employer that he was bargaining with; he used his union influence at two employers to force them to hire his cousin; he negotiated a sham union contract with an investment broker friend; and he illegally used union resources and power to ensure the election of his supporter in Local 601.

During his two-year suspension, Aloise continued to attend union conferences and was reportedly running Oakland Local 853 and Northern California Joint Council 7, while stands-ins held the offices. He will resume his Local 853 position on January 1, and reclaim his Joint Council 7 position as soon as the stand-in, Dave Hawley, resigns to allow Aloise to be appointed.

It is indeed a dark day for our union when a union leader, who was paid $383,462 in union salaries and allowances and yet resorted to corruption, is welcomed back into power.

This is why Teamsters for a Democratic Union (TDU) is necessary: to inform and organize members to root corruption out of our great union. A strong union has the trust of its members and polices itself to keep corrupt leader out.