Local 804 State of the Union Report 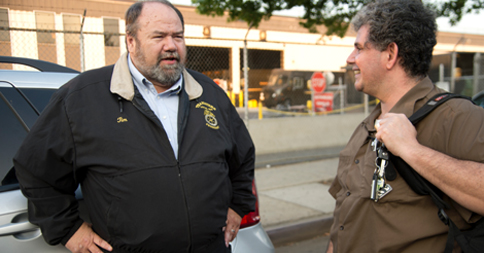 A State of the Union Report published by Teamsters Local 804 sums up Tim Sylvester and his team's accomplishments as a leaders, winners and rebuilders of Teamster Power. Congratulations to Local 804 members on everything they've accomplished in the last six years.

For the last six years, it has been my privilege to serve as your Local 804 President.

When we took office, we inherited a union that was reeling from contract givebacks and pension cuts. Officer salaries had soared to record levels, while our Health and Pension Funds were in financial crisis.

We took decisive action to rebuild Local 804 power. Six years later, our union is in a very different place.

We've produced a State of the Union Report to review where we’ve been and what we’ve accomplished together over the last six years. There’s much more to do to restore Teamster Power and win the respect we deserve from UPS.

Thank you for the privilege of serving as your President. I was a proud Local 804 Teamster long before I held any elected position—and I will remain one going forward. 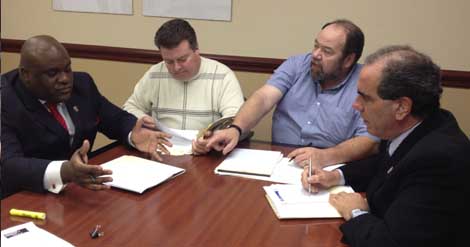 On our first day in office, we reduced the salaries of all officers and business agents to free up dues money to serve the membership.  Our predecessors paid themselves an average of $155,136 plus benefits. We cut all salaries to $115,000 a year—a savings of $40,000 per person—and never raised our compensation above $125,000 a year. We also stopped using members’ dues money to fund a 401K retirement plan that was exclusively for Local 804 officers. Through financial reform, we put your dues money to work for you. 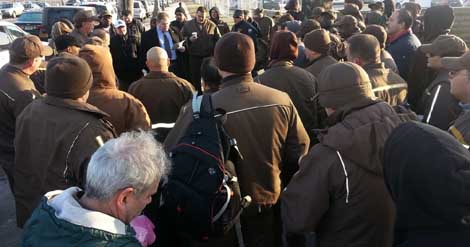 Mobilizing for a Better Contract

We ended the information Brownouts that kept Local 804 members in the dark during contract negotiations. We put working Teamsters on our negotiating committee and launched a contract campaign with bulletins, rallies and contract actions. While UPSers across the country got hit with givebacks, we won contract improvements including pension increases, more full-time jobs, more vacation opportunities in the summer, layoff protections, higher pay at peak for part-timers, a new grievance procedure and more. 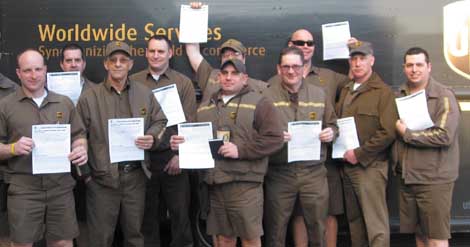 We launched contract enforcement campaigns to make UPS pay for violations that had long been ignored. We won record amounts of penalty pay for 9.5 and supervisors working. UPS management continues to walk all over the contract, knowing they have contract loopholes and weak International Union leadership on their side. We have to continue to stand up on the shop floor and in our own union to win the respect members deserve. 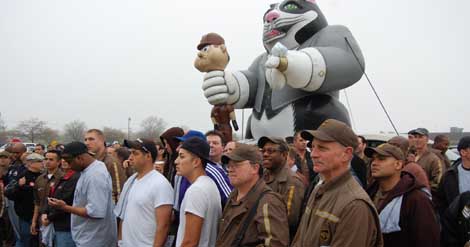 We took on UPS harassment in the streets and in contract negotiations.  The International Union made us withdraw our contract proposals on dishonesty, technology and harassment and claimed they would be covered in the national contract. That betrayal continues to haunt Local 804 members. 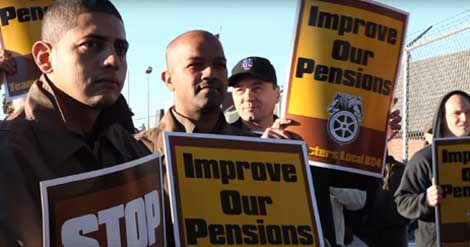 When we took office, members were fighting pension cuts and the elimination of 25 & Out benefits for new hires. Today, our pension has more than $1.1 billion in assets and we won pension increases of $400 per month. The International Union tried to get us to accept a pension of $3,700 a month—and to give up 25 & Out benefits. We refused and won and won the first $4,000 pension in Local 804 history and saved 25 & Out benefits regardless of age. 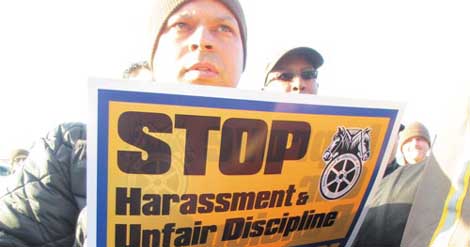 We won a new grievance procedure that delivers faster justice for Local 804 members. Under the old system, fired members could wait a year or more in the street for their case to be heard by an arbitrator. The new system reduces waiting time to weeks—and we used it effectively to win fired members their jobs back. 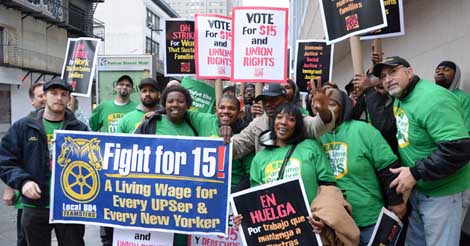 When the International Union sold out part-timers and negotiated starting pay of just $10 an hour, we didn’t give up, we fought back. We launched the Fight for $15 with demonstrations at UPS buildings and in the streets of New York City. Our goal is to win starting pay of $15 an hour and higher wages for every part-timer. 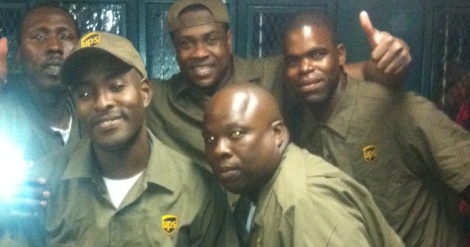 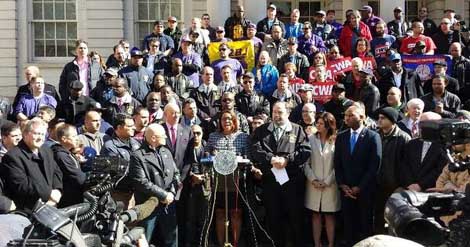 When we took office, our powerful local was politically isolated and weak. We turned that around and forged alliances with unions, community groups, progressive political leaders and the Working Families Party. When UPS fired 250 drivers, top city officials threatened to end millions of dollars in contracts and subsidies. Within days, UPS came to the table and returned every driver to work. Next, we put our political power and alliances to work in the Fight for 15. 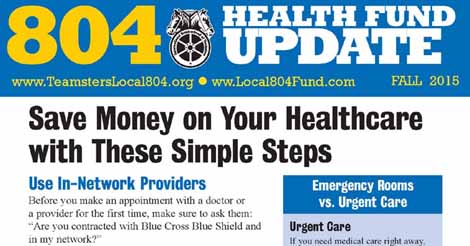 When we took office, the Health Fund had lost 83 percent of its assets, totaling $26 million in losses, and was headed for insolvency. The decisions about our healthcare were about to be taken out of our hands and put in the control of an arbitrator. UPS was demanding severe benefit cuts, including raising retiree healthcare to more than $1,100 a month. We saved affordable healthcare for members and their families and have built a strong Health Fund with over $50 million in assets. We also won an arbitration decision that will protect the Fund against irresponsible mismanagement and collapse in the future. 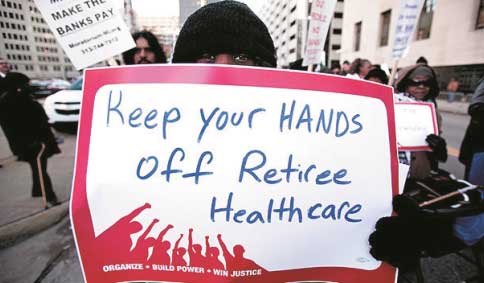 We stopped UPS from raising retiree healthcare to $1,100 a month but we were forced to institute increases during the Health Fund’s crisis. Since then, we have won multiple decreases in the cost of retire healthcare. Starting January 1, the cost of retiree healthcare will be cut across the board and it will be reduced even further on January 1, 2018—to $200/month for an individual, $300 for member and spouse coverage, and $450/month for family coverage. 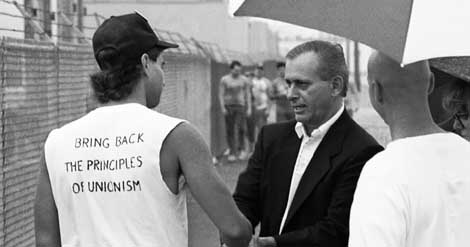 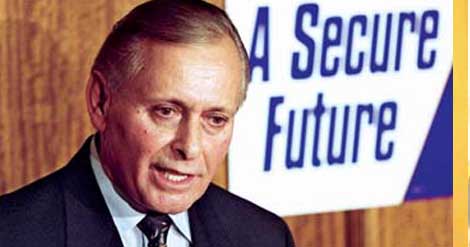 Restoring 804 as the Home of Ron Carey & Teamster Democracy

Ron Carey was Local 804’s greatest president and the first democratically-elected General President in Teamster history. In 1997, Carey led us to victory in a nationwide strike against UPS—labor’s biggest victory in decades. But Ron Carey was erased from our local’s official history because the previous 804 officers were uncomfortable with his vocal opposition to union corruption and IBT President James Hoffa. We restored Ron Carey’s place in our union’s history. Our union hall and meeting room proudly bear his name.