(Reprinted from the Wall Street Journal) UPS is to roll out Saturday delivery in April with plans to cover half the U.S. population by the end of the year. 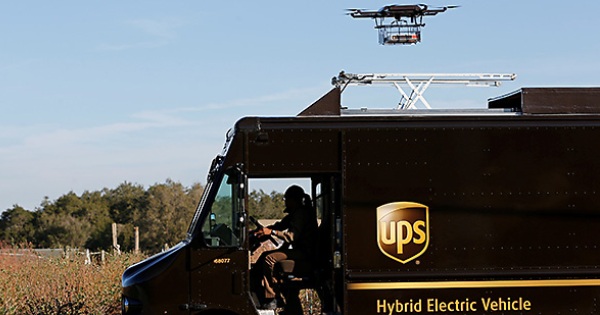 United Parcel Service Inc. said it would start making ground deliveries on Saturdays and showed off a drone delivery test, part of broader investments by the carrier to try to keep up with the shift to online shopping.

The Atlanta-based company will roll out Saturday ground delivery starting in April with plans to cover about half the U.S. population by the end of the year. It will take longer for drones to be used in daily operations as UPS, Amazon.com Inc. and others await federal airspace rules.

UPS currently delivers some express or airborne packages on Saturdays.

While the U.S. Postal Service and FedEx Corp. both offer Saturday ground delivery, UPS says it will also pick up and sort packages on Saturday too. That means items picked up on Saturday can be delivered on Monday. The change will also free up network capacity in the early part of each week.

“We didn’t just try to duplicate what others are doing,” Chief Executive David Abney said in an interview following an investor event in New York. “We’re doing it in a way that gives us a competitive advantage.”

The new services, along with additional investments in sorting centers and airplanes to keep up with e-commerce growth, will come at a cost. Last month, UPS issued a downbeat outlook as its business is squeezed by lower profits from residential deliveries and a stronger U.S. dollar. At a meeting with analysts Tuesday, UPS tempered longer-term sales and earnings guidance for coming years.

The years since have been marked by UPS and other carriers trying to adapt to new paradigm where a growing percentage of packages are delivered to homes, a less efficient route than its traditional business-to-business delivery that moves large amounts of goods to a smaller number of endpoints.

Investors have shown concern that UPS and rival FedEx are both in a period of massive investments in facilities, technology and other projects to help move the swell of orders that are shifting online. UPS plans to spend $4 billion on capital expenditures this year, and about 6% to 7% of overall revenue for the next few years.

The investments include upgrading and building about 70 new facilities around the world over the next three to five years. The addition of Saturday delivery, as well as the expansion of other services and construction costs, will bring another $100 million to $200 million in operating expenses.

As it spends to accommodate more volume, UPS says it plans to cut costs by up to $1 billion a year over the next three to five years. It is also increasing the prices shippers pay, including a recently announced rate increase, new surcharges for large packages and adjusting fuel surcharges weekly instead of every two months.

“Contrary to what you see in the banner ads, shipping is not free,” Kate Gutmann, the company’s chief sales and solutions officer, said.

UPS, like Amazon and others testing drones, also sees some room for new technologies to help reduce costs. The company said it conducted a test on Monday in Lithia, Fla., with a drone that delivered a package from the roof of a truck while the driver continued along a route for a separate delivery. It conducted the test with Workhorse Group Inc., which built the octocopter drone and battery-powered UPS truck.

Such technology does have limits.

“Over the skyline of New York City, there’s not going to be 10,000 or 100,000 drones that will deliver toilet paper,” Mr. Abney said. But, he said, there are critical uses where regular drone deliveries make sense, including in rural areas. Last year, UPS used a different drone to deliver medicine in another test.