Rhode Island Local 251 members voted on Sunday to approve a Bill of Rights to strengthen members’ rights by an overwhelming 90 percent margin. 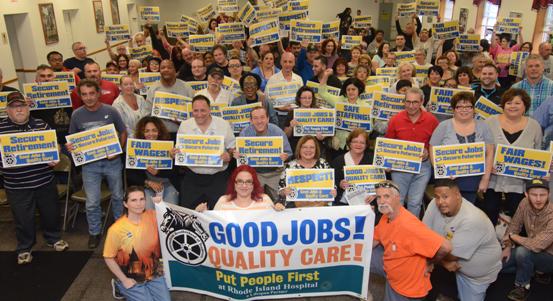 Members also voted to lower the union dues rate for all members who make less than $15 an hour and to establish a Local 251 Strike Fund to help members win good contracts.

Democracy Delayed, But Not Denied

These changes were first proposed three years ago by a rank-and-file movement called 251 United Action. The officers who ran Local 251 at that time fiercely opposed the changes.

On the day of the bylaws vote in 2013, more than 800 Teamsters turned out to cast a ballot—more than twice as many members as can fit in the union hall.

Members in the packed hall voted and then the hall was emptied and refilled to capacity for a second vote. When the ballots were counted, a majority of members had voted in favor of each and every reform.

But the Local 251 Bylaws were not changed because a two-thirds majority was required to officially amend the bylaws.

The new leadership took the unusual step of reducing their own powers—and increasing the power of the membership. The officers cut their salaries, launched contract campaigns and a new organizing program, and proposed the Member Bill of Rights.

Ninety percent of members voted to approve the reforms.

Find out more about changing your local union bylaws here or contact TDU.