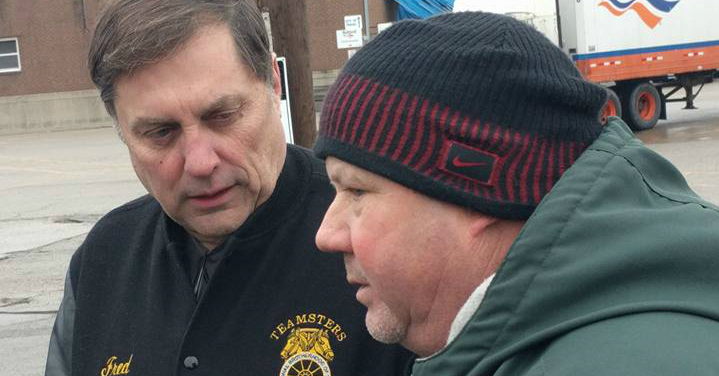 Teamster Voice: Why are you running for Teamster General President?

Real wages are going down. Part-time throwaway jobs are going up. Hundreds of thousands of Teamsters face the threat of living out their retirement years in poverty because of pension cuts.

Corporate greed is out of control and we need to get off our heels. Contract negotiations with UPS were a chance to draw a line in the sand—and win.

Instead Hoffa gave concessions to a company that was making $4.5 billion in profits. The other employers stepped up and said, ‘We want some of that too.’

In national contracts covering 300,000 workers, Hoffa and Hall gave healthcare cuts, wage cuts, pension cuts, concessions. It didn’t have to be this way.

Members were ready to fight concessions. They voted No across the country. In my local, they Voted No by 94 percent.

Teamsters unite when there’s leadership and a plan to win. Hoffa and Hall have shown they won’t lead. They need to get out of the way for Teamsters who will.

TV: Hoffa’s defenders would say the problem is the employers and you’re blaming Hoffa for problems that aren’t his fault.

FZ: Of course, it all starts with the employers. But surrender isn’t a strategy.

A union is about standing up and fighting back—but you’ve got to do it smart and have a plan to win.

Let me give you an example. Across the country, we have a major problem with grocery employers using subcontractors to leverage concessions. They hand over the trucking and warehousing operations to an outfit like C&S—and then the subcontractor says, “We need concessions or we’re going to move, or we’re going to lose the work.” This has been going on for years and Hoffa has no strategy for it.

Kroger tried to pull this crap in Louisville. We refused to negotiate concessions. The subcontractors said, “Then we’re keeping the workforce but we’re going nonunion.” We geared up to strike for union recognition and they brought in replacement workers from all over the country and put them up in hotels. We weren’t about to walk into that ambush; instead we set one of our own. We waited for the Kentucky Derby when every hotel room in Louisville is sold out for two weeks. Sure enough, the hotels kicked the replacements to the curb and they flew back home. Then we struck their ass. We won a contract that has better healthcare, retiree healthcare and stronger job security.

By the way, Hoffa told other Teamsters to stay out of our fight. When you don’t know how to take on employers, you don’t like people who do.

TV: You mentioned pension cuts. This is a huge crisis….

FZ: More than 400,000 Teamsters and retirees have gotten a letter saying their pension will be cut in half—or worse. I’m one of them.

Hoffa has done everything wrong. For 17 years they did nothing to bring employers into the funds. Worse, they let big employers abandon Teamster pensions and start their own company retirement plans: UPS, Waste Management, now they’re trying it with Kroger. The members at these companies got substandard retirement benefits and the Teamsters who stayed in Central States were abandoned to a declining fund.

Then Hoffa teamed up with employers and joined the group that drafted the pension cut legislation that’s allowed the plan to slash our pensions. It’s criminal and we’d be fools to trust the people who created this problem to fix it.

This is another case where the rank-and-file have shown twice the backbone of the International. Teamsters and retirees and these pension committees have done a tremendous job—educating, organizing, getting in the media, building political support. They deserve a lot more than the lip service and photo ops they’re getting from the IBT. In the short term, we need an all-out mobilization to pass the Keep Our Pension Protections Act. Looking ahead, it’s about contract campaigns to protect our pensions at negotiations and making strategic long term commitment to organizing the nonunion competition and bringing employers into our pension funds.

TV: You’ve made a point of talking very directly about corruption. Why?

FZ: Because there’s a direct line from corruption to concessions and benefit cuts.

The vast majority of officers are hard-working, honest people who are doing the best they can for the members. When we talk about corruption, you’re talking about the clique that’s around Hoffa.

This Rome Aloise scandal makes me sick. Here’s a guy who was taking gifts from employers and asking them for favors while he was in negotiations with them. The same executives who gave him the gifts told him what a great job he did twisting the arms of local officers to settle short in contract negotiations. You sell out the members and walk away with tickets to a Playboy Super Bowl party for Hoffa’s chief of staff.

This is how Hoffa and his boys roll. Hoffa is golfing buddies with the investment firm owner that Aloise negotiated a sham contract with. They go to Europe together to golf. It’s all there in the report. It will turn your stomach.

Look, there’s corruption in every organization. The question is what do you do when it’s uncovered? Hoffa will never act on corruption. First, because that’s how he rolls himself. And second, he will never punish the power brokers that deliver the votes that keep him in office—no matter how corrupt they are. He has only ever acted when the Independent Review Board has forced his hand.

TV: You’ve been a harsh critic of TDU in the past. Now you’re running with TDU’s support. The Hoffa Campaign says you’ve flip-flopped.

FZ: Well, TDU’s been tough on me too through the years. Maybe you’re the flip-floppers (laughs). I’m not a TDU member, never have been. But I’ll say this—TDU exposes and condemns corruption within the IBT. Hoffa covers it up. That’s why the members don't trust him. When you cover up corruption and sell out the members, it makes organizing almost impossible. Anti-union employers have a field day against us in organizing campaigns.

On the big issues in our union, from concessions to pension cuts to corruption, TDU members have taken up the good fight. We’ve built a coalition and that’s the right thing to do.