Hoffa-Hall Call for No Election

[UPDATED] The Hoffa-Hall administration declared there should be no International Union election this fall and denounced Teamsters who want the opportunity to vote for new leadership as a threat. 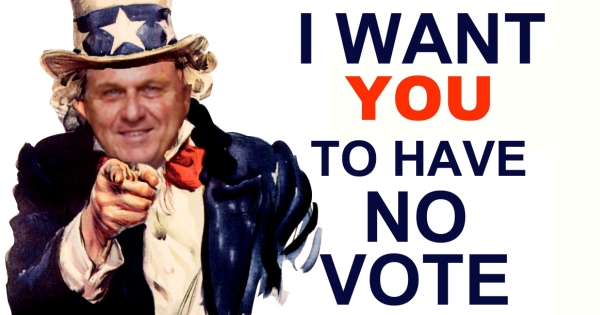 In a scripted moment near the close of the Convention on Monday afternoon, President Hoffa called on Bernadette Kelly, an International Rep on the Hoffa-Hall payroll.

Kelly denounced having an International Union election as a waste of money because the “great leadership of Jim Hoffa and Ken Hall and the incredible unity of our ranks from coast to coast are on display for all to see.”

Many Teamsters see something very different on display, including the worst pension cuts in Teamster history, declining union power and concessions in every contract negotiated by Hoffa-Hall, and embarrassing corruption scandals in our union.

Kelly came to the mic sporting a Hoffa-Hall-Aloise sticker on her vest. Rome Aloise will soon be booted from our union for taking payoffs from employers and negotiating sham contracts.

The scripted denunciation of Teamsters United and Teamster elections violates the election rules. Kelly was fined $500 and the Hoffa Campaign was also fined $500. The Election Supervisor will investigate the role of the IBT in this violation as well.

Teamsters United delegates are standing strong and nominating their candidates. Members will have the final say in a democratic election this fall. United, we win!

The Hoffa-Hall Campaign praised Bernadette Kelly for denouncing the threat of a Teamster election.