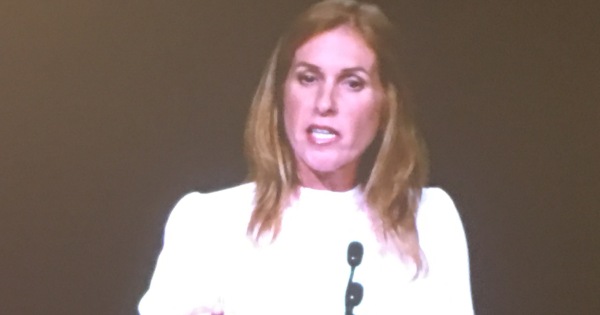 It’s great to be here at the Women’s Conference with so many powerful Teamster women from around the country.

This is my second Teamster Women’s Conference and I love it.

My first women’s conference was in 2011 and it was a powerful experience for me, which remains vivid with me today, six years later.

And now I am your vice president for the Southern Region, and I am here to serve you, the members.

If you are active in your union, if you care about this union STAND UP and let’s hear it……

There is so much power and energy here.

Now, let’s try something else.

Thank you. I want to salute the leaders here who just stood up.

But I also want to point out an obvious problem.

But only a handful of us ever run for, or become, union officers.

I am the ONLY woman out of 24 members of our International Union General Executive Board.

We have 369 Locals Unions. But there are only 10 women who are principal officers (less than 3%) and only 287 total as leaders on their Local’s executive board.

That's not enough and we all know it.

This is not just a problem of gender.

There are only two Latinos and only one African American on the International Union’s General Executive Board.

Our union leadership should look like the membership. We have a long way to go but we are Teamster Women and we can change that.

Teamster Women have so much to offer this union. We’ve seen the energy here at this Conference. Women sharing great ideas.

But, we need that energy and those ideas at every level of leadership in our union.

Women make up a large part of our workforce. Teamster women deserve a seat at the table to negotiate our contract, wages, and benefits.

I bet if I asked how many of you campaigned for a Teamster brother who is running, you would all be standing up.

It’s time for more of us to start running, too.

This is not about us versus them. What I am talking about is Teamster sisters being equally represented in our locals and in our union.

Historically women have only advanced when we banded together and fought for our rights.

Let me give you one example.

In 1881, thousands of African American women in Atlanta organized themselves, dubbed the “Atlanta washer women’s strike” to demand higher wages, respect for their work, & control over how their work was organized.

These were women who earned $4-8 month for hard work and long days.  They started as 20 and grew into 3000.  What better example of women solidarity and strength.

They were seeking $1 for every 12 lbs. of laundry if you can believe that.

They built so much community support that they threatened a General Strike.  And they won their $1.

Think about this. We’re talking about 1881 in Atlanta. There were no labor laws. Fifteen years earlier, these women had been enslaved.

If women could take on the establishment and win in Atlanta in 1881, then there is nothing we can’t do as Teamster women today if we take up the challenge.

Today, we face many challenges.

Our union needs to be on the front line of many important fights.

We’re fighting for fair living wages, equal pay for equal work, and an end to part-time poverty at companies like UPS.

No one working under a Teamster contract should be making $10 an hour.

If Fast Food Workers can win $15 an hour, then Teamsters can Fight for $15 and win that as an absolute minimum wage in every Teamster contract—starting with the UPS contract next year.

We need all hands on deck to win these fights.

Embracing diversity and empowering women and people of color means more power for our union.

And we need more power.

I want to recognize some of the Teamster women who opened doors and blazed the trail for us.

Diana Kilmury….Diana was a Construction Teamster from British Columbia. As the co-chair of Teamsters for a Democratic Union, Diana helped win the Right to Vote for our International Union officers.

In 1991, Diana became the first woman to be elected as an International Union Vice President. That’s when we started having Teamster Women’s Conferences.

Sandy Pope. In 2011, Sandy Pope became the first woman to run for General President. She didn’t win, but she made history.

Clara Day. Clara Day was a Montgomery Ward worker in Chicago in 1955.

Sister Day got fed up with mistreatment and segregation.

Clara was elected to Local 743’s executive Board and was a leader in our union and in the community.

I have to mention that yesterday I viewed Local 743’s website and their current board is an example of diversity in leadership.

Clara was also a founding member of the Coalition of Labor Union Women or CLUW—an organization that networks union women and encourages women leadership in our unions.

It’s time to encourage women leadership in the Teamsters.

So How do we start? We start by taking a pledge.

1. Let’s commit to getting even more involved in Teamster campaigns for social and economic justice.

2. Let’s commit to run or help a Teamster sister to run for office in our local unions.  Even if you run and lose, you win because you are opening the door for other Teamster sisters.

3. Let’s reach out to each other. Talk to the women in your local. We all know sisters at our local’s who would make excellent officers on their local’s executive board.

4. Support each other. Be accessible and open to women candidates and women in leadership.

5. Contact our Teamster sisters who are in leadership positions and talk to them. If you are interested in stepping up as a Teamster leader, talk to me. I want to help.

6. Ask your local to establish a women's committee for women run by women.

8. Get resources from groups that help women develop as activists, stewards and leaders.  Get involved and network and you will find a strong sisterhood of support out there for you.

9. Ask your local to send women to educational conferences like CLUW, the Labor Notes Conference next April in Chicago, and to the annual teamster women’s conference.

We are Teamster women and I am damn proud to be a Teamster.