Lessons from the 1997 UPS Strike

Twenty years ago, Teamster members won labor’s biggest victory in decades in the 1997 UPS strike. How did it happen—and what are the lessons for today? 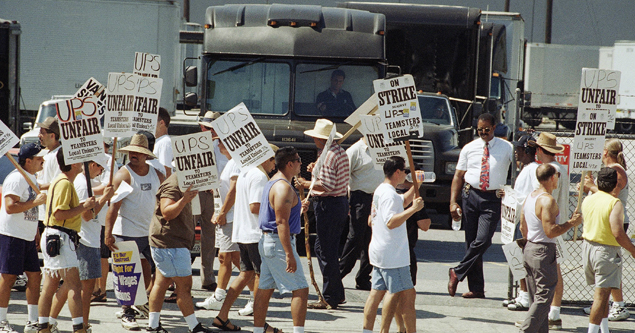 UPS management is on the offensive. The Hoffa years have brought contract givebacks and go-along, getalong labor relations.

Harassment and contract violations are up—and members’ faith in the union leadership is at an all-time low.

The 20th anniversary of the 1997 contract victory is a chance to remember that we can build union power, fight back and win.

The 1997 UPS contract fight was a high-stakes showdown over Teamster jobs and benefits.

UPS wanted to take over members’ pensions. Management’s goal was to freeze pension benefits—and eventually replace our pension with a 401k.

UPS wanted the right to increase subcontracting of good feeder jobs. Low-wage part-time jobs were on the rise.

For years, UPS had been cutting costs by shifting toward low-wage part-time work. In 1962, Hoffa Sr. allowed UPS to use part-time workers. In 1982, the IBT let UPS cut parttime wages to $8 an hour.

By 1990 half of all UPS workers were part-timers. Unless something was done a clear majority of UPS jobs were going to be part-time.

Ron Carey, a former UPS driver and the first democratically-elected General President in Teamster history, decided to draw the line in the 1997 contract.

But the seeds of the victory were planted a year earlier when the International Union launched a contract campaign to mobilize members and prepare for contract negotiations.

The IBT pulled members off the job to work full-time for a year to reach out to members and organize rallies and workplace actions on bold contract demands.

Tens of thousands of Teamsters used high-pitched whistles in the hubs to “blow the whistle” on supervisors working and subcontracting.

When old-guard officials refused to support the campaign, the IBT field staff worked directly with shop stewards and members. TDU activists worked with the International to implement the campaign.

At the bargaining table, management refused to budge on the core issues of pensions, subcontracting and full-time jobs.

The day before the contract expired, management made a “final offer” and demanded that it be put to a membership vote.

Carey refused to put the weak offer to a vote.

At the request of a federal mediator, Carey agreed to have negotiations continue for three days past the deadline.

But management refused to budge—and on August 4 the strike was on.

Public Stands with Us

The public stood with union members who were fighting for good jobs and against the trend toward lowwage part-time jobs.

Our union organized drivers to “walk their routes” to deliver leaflets and window signs to customers.

A Gallup poll done during the strike showed that the public supported Teamster strikers over the company by a 2 to 1 margin.

Facing defeat, management caved in on every major contract issue.

To settle the strike, UPS agreed to create 10,000 new full-time jobs by combining 20,000 part-time jobs. These were the first 22.3 full-time jobs won in Teamster history.

UPS also agreed to raise pensions by as much as 50 percent —and to drop its demand to take over Teamster pensions.

The company agreed to new restrictions on subcontracting feeder work.

The contract also included the biggest wage increases ever at that time.

Under Hoffa, employers have gone on the offense and the contract campaign has been put on the shelf.

The Hoffa crowd talks tough and settles short—and then sells the contract. But increasingly, members aren’t buying the sales job.

Many UPS and UPS Freight Teamsters voted no on the last contract—and got stuck with givebacks anyway.

After carhaul Teamsters organized and voted 87 percent no, they defeated wage freezes and won job protections.

Let’s put that formula to work. United, we win!

Contract Campaigns that Can Win

What’s the difference between a real contract campaign and the phony Hoffa version?

Under Hoffa, it’s a common tactic for the IBT to publicize management demands for concessions to lower members’ expectations. When UPS management demanded concessions in 1997, Teamster leaders broke off negotiations. The 1997 contract campaign was about winning bold new gains.

Under Hoffa, members have been kept in the dark or issued vague contract updates. In 1997, UPSers were kept informed about exactly what we were fighting for—and what members could do to win these demands.

A real contract campaign is a lot more than a Facebook page or photo ops. In 1997, members held rallies and job actions on specific contract demands from full-time jobs to job security.

Management tries to scare members that UPS will lose customers if we don’t settle the contract early. This is a trick to get members to settle early, settle short and accept a weak contract.