Hoffa’s key West Coast vice president, Rome Aloise, could face a lot more than just expulsion from the Teamsters Union; he has just admitted that he is under criminal investigation. It’s now about more than corruption charges by the Independent Review Board for Aloise. 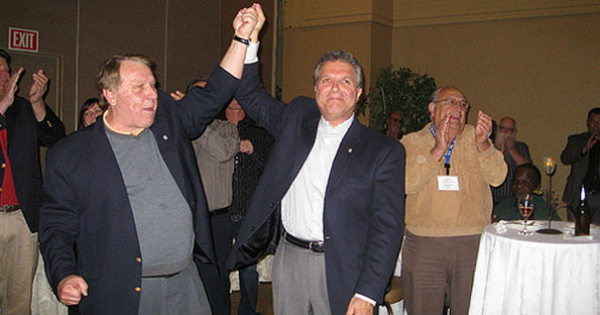 After investigators issued a 122-page report documenting the corruption charges against Aloise, the Hoffa-Hall slate nominated Aloise for a five-year term of office, showing their appalling disregard for the membership of our union.

“There is a straight line that runs from corruption to benefit cuts and concessions,” Fred Zuckerman said in his address to the Teamster Convention. He’s exactly right.

The corruption charges against Aloise detail how he dropped members’ contract demands at Southern Wine & Spirit and was rewarded with tickets to an exclusive party thrown by Playboy at the Super Bowl in New Orleans.

Aloise passed the illegal employer gift on to Hoffa’s Chief of Staff.

Aloise tried to use the criminal investigation as an excuse to delay indefinitely the charges brought by the Independent Review Board (IRB).

But in a July 18 letter to Hoffa, the Independent Review Officer (IRO) rejected that excuse. The IRO, Benjamin Civiletti, ordered that Hoffa has “20 days to inform the IRO in writing that a prompt hearing will be held,” or else Civiletti will hold his own hearing.

He goes on to note that Hoffa is in violation of the Final Order of the federal court, and failure to comply would be a second violation.