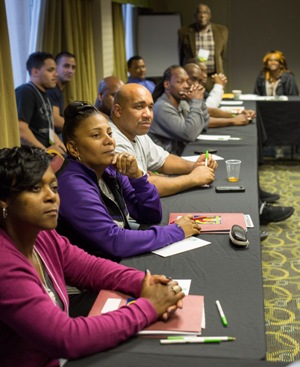 Members of the TDU Black Caucus are working together to build a union that fights for all Teamsters.

The Black Caucus shares information relevant to the struggles of Black Teamsters on the job and in our union. We bring together reform-minded Black Teamsters from across the country and every Teamster industry. We work to empower Black Teamsters to organize for justice in the Teamsters and take leadership in the reform movement.

Click here to ask a question, send a comment, or find out how you can get involved.

By Willie Hardy This month we celebrate the legacy of Dr. Martin Luther King, who did so much to further the cause of equality in our country. Today, it has become popular for politicians and the media to praise him, while some of them ignore what he stood for. I, for one, am getting tired of the hypocrisy. To honor the man, we need to tell the truth about what he stood for. Dr. King...

June 25, 2012: TDU member Mike Spruill interviewed about how and why he became a TDU member and a Teamster. How did you get involved? It runs in the family. The union movement and civil rights struggle crossed paths a lot in my house. My uncles were union, and my great aunt Mary Lou Mobley in North Carolina was very involved with Martin Luther King Jr. and the civil rights struggle. They never let me...

May 3, 2011: The 36th Annual Educational Conference and Banquet of the Teamster National Black Caucus will be held August 9 to 14 in Detroit, Michigan. The event will be held at the Marriot Hotel at the Detroit Renaissance Center. The registration fee for rank-and-file Teamsters is $175 and includes workshops, the Saturday morning prayer breakfast, the Clara Day luncheon and a ticket to the Saturday night banquet. Registration fees for Teamster officers is $225....
Get Advice Join TDU Donate