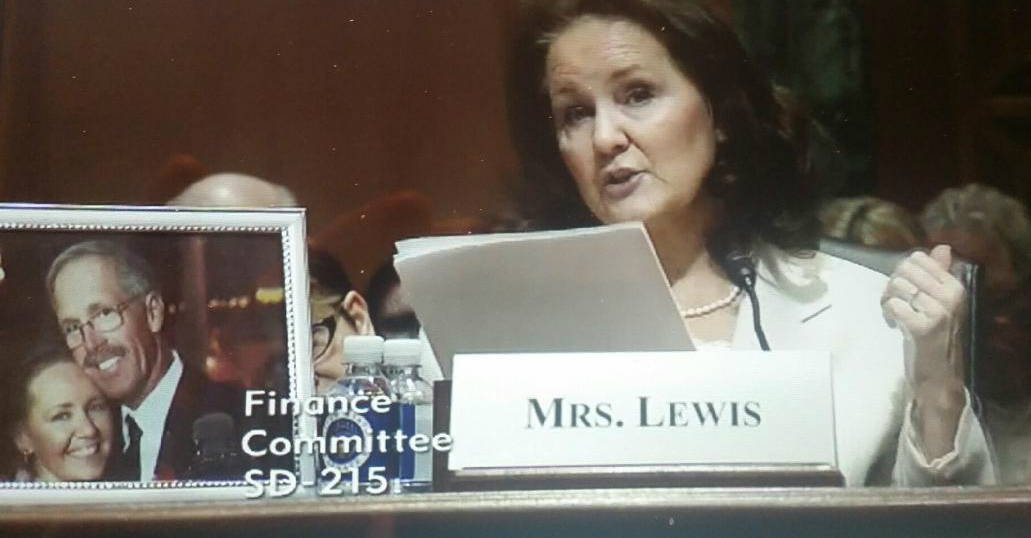 “This is not a partisan issue, stated Lewis. “This is an issue of fundamental American values, of keeping promises to this nation’s retirees. We are Republicans and Democrats and Independents. We live in your states – we are your constituents. We worked hard our whole lives and did everything right so we could have a comfortable retirement....” Read Rita’s written testimony to the Senate.

Over the past year, Rita stood side by side with her husband and hundreds of other current and retired Teamsters active in the Southwest Ohio Committee to Protect Pensions. This committee and others that have sprouted up throughout the Central States have been on the frontlines in the fight to defend our pensions.

She spoke for thousands when she stated, “We’re asking you today to please help us. The cutback provisions of MPRA are not the right way to solve this problem. As you know, the MPRA was negotiated behind closed doors, without any public hearings on the actual bill, without input from the retirees and employees and their widows and spouses, who will be most affected.... I’m confident Congress could certainly come up with a better solution to the funding problem....”

She concluded, “... please do not let politics get in your way. We need a comprehensive bill that both parties can support that truly fixes the problem for current and future retirees. The America I know is one that keeps its promises to its citizens, particularly those who are older and vulnerable. My husband Butch was a hero who fought for his country and for the American values we all hold dear. Now I’m asking you to be heroes too and help us solve this problem by finding a solution to support plans, the PBGC and save our pensions.”

Karen Friedman, Policy Director of the Pension Rights Center, reports that “Senators on the Committee were visibly moved by her powerful testimony.”

Immediately following the hearing, the Democrats on the Finance Committee sent the Chairman, Orrin Hatch, this letter urging "bipartisan action to help ensure hard working Americans can count on the pensions they have earned."

Rita Lewis and hundreds of other active and retired Teamsters plan to return to Washington, D.C. on April 14 for a rally to call on Treasury to reject the Central States proposed cuts. Many will be there to honor the memory and inspiration of Butch Lewis, who worked tirelessly until his final day to defend our pensions. Butch was a long-time member of Teamsters for a Democratic Union who stood strong on principles, not politics.

Check out this excellent piece in the Duluth News Tribune on the roots of the pension crisis.