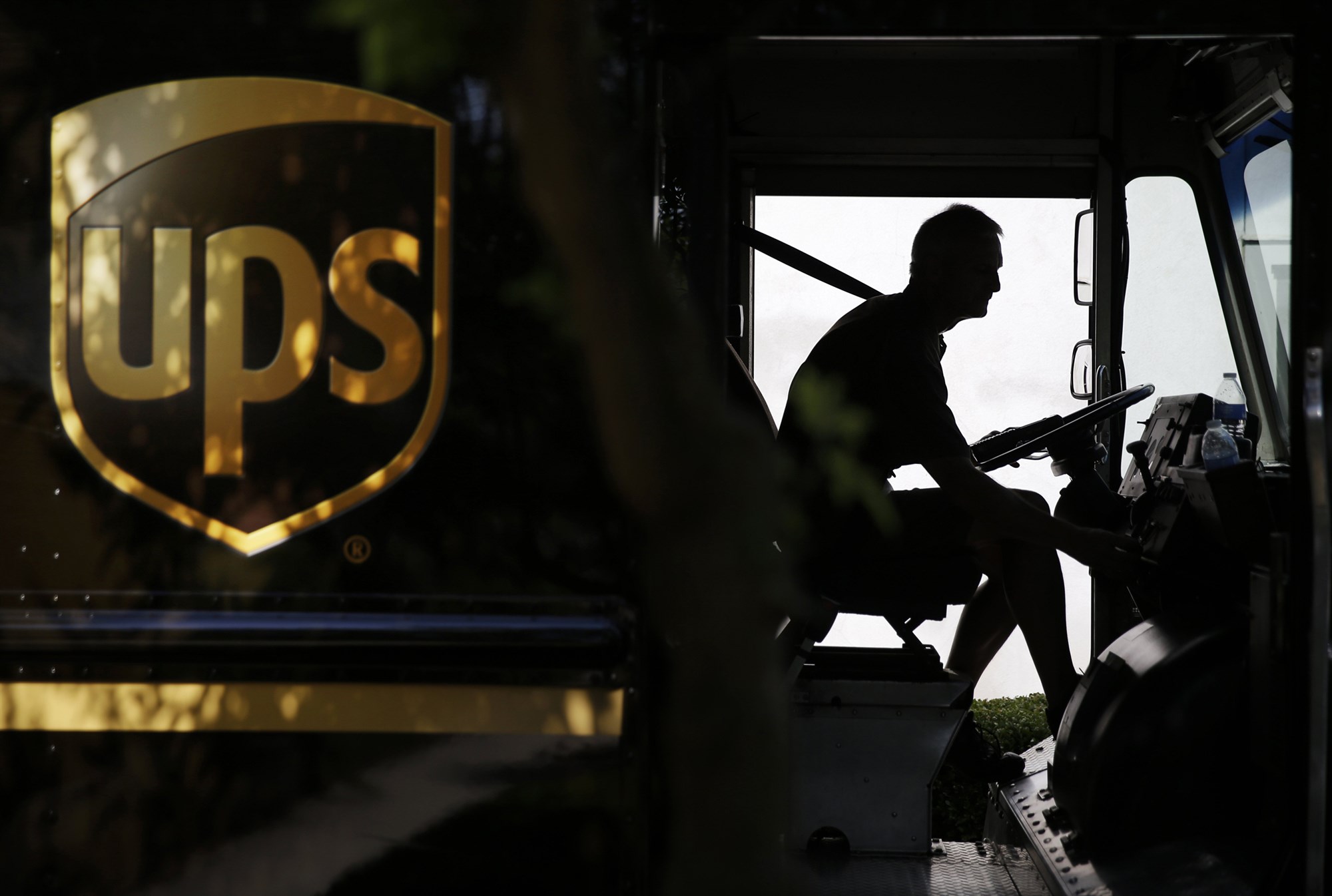 Deliveries are soaring during the coronavirus pandemic as Americans stay home from work and school, but 12 UPS drivers in nine states tell NBC News they don’t think their company has done enough to protect workers or the millions of customers they serve.

UPS has told drivers across the country not to share their hand-held devices with customers when making signature deliveries, and drivers in California, Wisconsin, Michigan and Washington said their daily morning meetings had been canceled since Monday to avoid forming crowds.

But drivers in all nine states said UPS hadn’t provided any protective gear to workers in their areas — no gloves or masks — or instituted “no contact” deliveries. They would also like the company to supply them with hand sanitizer, but UPS has instead advised frequent hand washing, which drivers said isn’t particularly feasible on their routes.

The drivers spoke on the condition of anonymity, due to fears about losing their jobs. 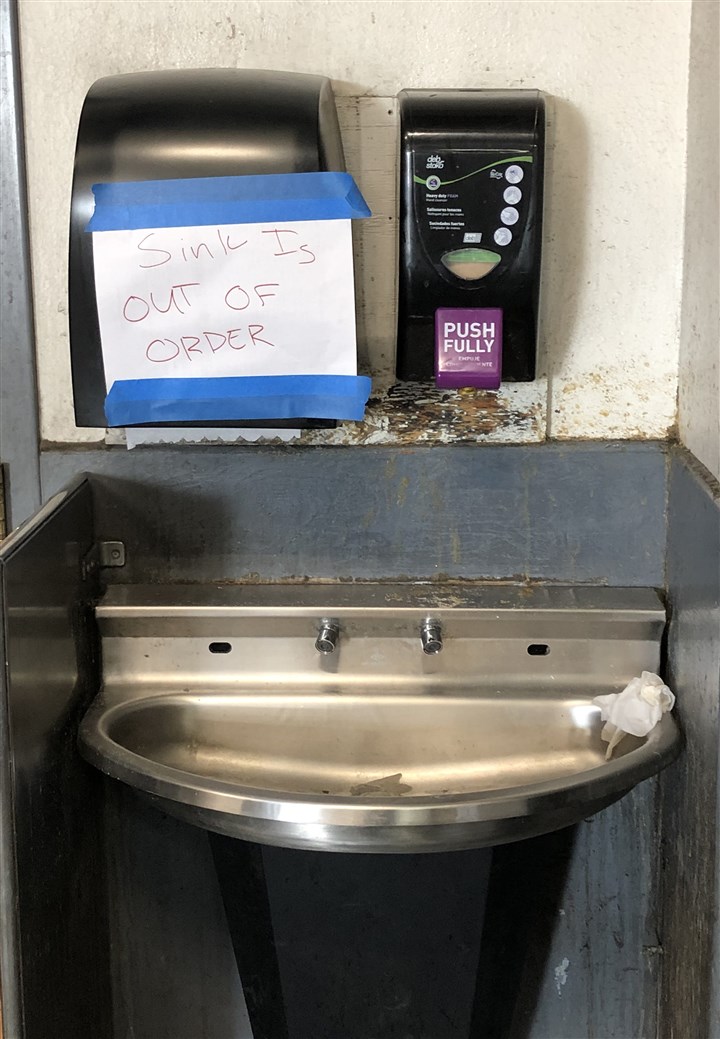 A broken sink at a UPS hub in Fresno, Calif. UPS drivers have been encouraged by management to wash their hands frequently, to prevent spreading or contracting the virus. The facility has multiple sinks, but a Fresno driver told NBC News, "The only thing you're telling us to do is wash our hands, and the sink is out of order! It's ridiculous."

A driver in Fresno, California, noted that he is still making indoor deliveries — where drivers bring packages into office buildings or large residences — and hasn’t been given specific guidance about maintaining distance from customers.

“I mean, we’re at high risk. It’s not a matter of if, but when somebody gets sick,” he explained. “They recommended social distancing, but you have contact with numerous people in the warehouse, and then when we go out on our routes we have contact with tons of people.”

“I would hate to be the person that went into this retirement home and ended up getting somebody sick,” he added. “I mean that would be devastating to me.”

A driver in Massachusetts concurred. “I got 160 stops on here, 300 packages,” he said. “If I’m sick and don’t even know it, that’s 300 opportunities for people to get it. I deliver to doctors’ offices, urgent cares, primary care offices.”

“The potential for bad things to happen is crazy.”

Messages UPS drivers have received on their handheld devices (called DIADs) about coronavirus since March 11.

The spokesperson said drivers can wash their hands at the businesses they serve, but did not specifically address a question about providing workers with gloves, hand sanitizer or disinfecting wipes.

None of the 12 drivers NBC News spoke to said they had received hand sanitizer or gloves. Four drivers said they are still delivering to health care facilities or senior living homes without having been provided with masks. And many noted that the advice about washing hands at the businesses they serve didn’t take into account how many businesses and bathrooms are now closed.

Drivers in multiple states were skeptical that their facilities or trucks were being disinfected as the company promised.

On Friday, union employees represented by the Teamsters petitioned UPS, calling on the company to provide 14 days of sick leave to quarantined employees — who were being encouraged to use their sick pay or vacation time — and asking that the company provide hand sanitizer and increase cleaning of heavily used areas.

UPS came to an agreement with the Teamsters on Wednesday to provide up to 10 days of emergency paid leave for employees who have been diagnosed with the virus, live in a household with someone who has been diagnosed, or are being forced to quarantine.

“There hasn’t been any, ‘Stay home if you’re sick talk’” from management, one Atlanta driver said.

Jeff Schenfeld represents nearly 9,000 unionized UPS workers in the Fort Worth, Texas, area. “They want assurances that they’re going to be protected while doing their jobs," he said. “They just don’t feel like they’re being taken care of.”

Several drivers also cited a National Institutes of Health study showing the virus can live on cardboard for up to 24 hours as one source of their concern, but Karen Levy, a microbiologist and epidemiologist at Emory University, said that contracting the virus from a package is probably not the highest risk for the employees.

“I think the number of contacts with other humans that they’re having is potentially more of a risk than the packages themselves,” she said, noting that the company should provide workers with some kind of protective equipment. “It doesn’t have to be hand sanitizer per se. A very simple thing they could do is provide latex gloves and spray bottle of alcohol. That way, drivers could spray alcohol on their hands.”

One UPS hub has taken this precaution. UPS’ largest air hub, in Louisville, Kentucky, has been distributing spray bottles of a CDC-recommended sanitizer mixture at work areas, according to the union local.

UPS drivers and union representatives in Florida, Georgia and New York said they are seeing volumes they normally only see during the holiday season, with some working 12-hour days or longer to keep up with the demand.

“We had a guy this morning go out with an entire truck with just toilet paper on it,” a driver in Wisconsin said Friday.

The Department of Homeland Security has deemed delivery an “essential function,” meaning it is exempted from any government orders to shelter in place. Retail experts say the volume of deliveries will likely continue to rise.

Other delivery services that are continuing to operate such as the United States Postal Service, FedEx and Amazon, have faced similar pressure from employees to upgrade their safety measures. On Wednesday, Amazon announced it was suspending its pre-shift, in-person meetings and reconfiguring break room spaces at its warehouses to reduce the risk of virus transmission.

The Postal Service directed NBC News to a statement in which it said it is communicating Centers for Disease Control and Prevention guidelines to its employees. A spokesperson for FedEx said the company is following guidelines from government authorities as well as "supplying hand sanitizer and other person[al] protection equipment, increasing the cleaning cycles in our facilities and practicing social distancing."

Public health experts say using delivery services is generally a good thing when it comes to fighting the spread of the virus.

“I think the delivery service is critical now in providing people the ability to social distance,” Levy said.

“The risk of people leaving their houses is greater than the risk of getting deliveries.”

In the meantime, UPS drivers feel that their concerns have been ignored. On an internal employee website, a message from UPS saying that the company cares about its employees’ safety was met with dozens of comments asking why facilities had not been cleaned and when workers would receive protective equipment, according to screenshots reviewed by NBC News.

Said a driver from Mesa, Arizona, “Most drivers are more than willing to do what it takes, but the feeling here is that the company committed us to a situation the CEO wouldn’t do himself. The drivers are willing to get the job done, but the company is doing the least they can do to protect the drivers, just enough to say that they did something."

UPDATE (Mar. 20, 2019, 11:58p.m. ET): Twelve hours after this story published, UPS tweeted that it will be providing hand sanitizer for every vehicle and facility.