“Fix it! Fix it” Thousands Rally to Save Pensions

Thousands of unionists, most of them Mineworkers and Teamsters, but also workers from other unions and groups, rallied under a hot sun outside the Ohio State Capitol in Columbus on July 12 to demand that Congress take action to save workers’ earned pensions. 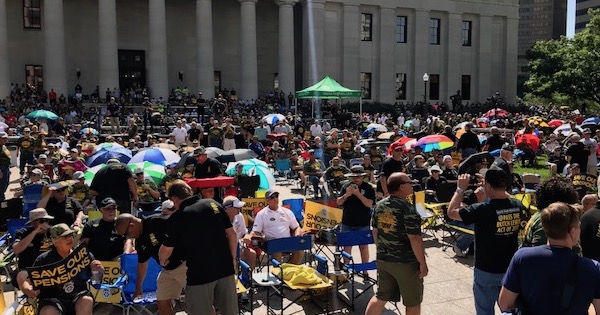 We heard a number of leaders from various unions pledge to fight the devastating cuts that will occur unless Congress acts.

Workers and retirees, many accompanied by their spouses, came by car and bus from as far away as Rhode Island and New York State in the east to Minnesota and Missouri in the Midwest.

The rally was held in Columbus the day before a select committee made up of Republican and Democratic Party members of the U.S. Senate and House of Representatives are to meet at a hearing in the Ohio city to discuss federal legislation to save multi-employer pension plans.

Retired Ohio Teamster Mike Walden, president of the National United Committee to Protect Pensions, heralded the nationwide rank-and-file effort oppose the Central States Pension cuts, but said there was much work left to do.

“We’ve come together, people,” he told the rally. “Shake hands and pat yourself on the back.”

Chants of “No cuts, no cuts” rang out through the crowd as Teamster President James Hoffa pledged to support the campaign to preserve pensions.

Many in the crowd wore the Mineworkers Union’s camouflage clothes, and according to one Mineworkers organizer, that union chartered 125 buses to the rally, from Indiana, Kentucky, Ohio, West Virginia and Alabama.

Cecil Roberts, president of the Mineworkers, underscored the importance of not giving up. “As Dr. [Martin Luther] King told us, if we don’t have something to die for, it isn’t worth living,” Roberts said.

Sara Nelson, president of the Association of Flight Attendants, gave a stirring appeal for solidarity and led the crowd in chants of “Fix it, fix it,” a reference to repairing the country’s beleaguered pensions. “Fix it” was printed on hundreds of posters that rally participants carried.

About 50 Teamsters from Minnesota travelled 800 miles by car and bus to be part of the event.

One of the most moving moments of the rally occurred when Mike Weldon asked Rita Lewis, the widow of Teamster member Butch Lewis, to stand.

A bill to save the multiemployer pensions called the Butch Lewis Act, was introduced in the U.S. Senate in the last session, authored by U.S. Sen. Sherrod Brown of Ohio. Butch Lewis was a key leader of the movement to save pensions before his death. His widow was sitting in the front row and she was warmly applauded.

On July 13 hearing will be held in Columbus by the Joint Select Committee on the Solvency of Multiemployer Pension Plans, the bipartisan committee charged with proposing a solution to Congress by this November.

The pension movement will be there to be heard.

By Randy Furst, a member of the Minnesota Committee to Protect Pensions.