We lost a dedicated Teamster and wonderful human being when Al Adams passed on September 7 at the age of 79. Al was the kind of person who makes the union and the world a better place. And he was a dear friend to myself and many others. 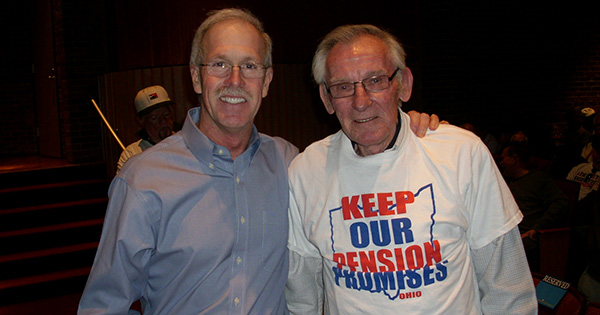 Al’s handle was “work stoppage,” which is how a few of his friends addressed him. That sums up the kind of Teamster he was: ready for action and solidarity.

Al was a freight driver in Cleveland Local 407 and a Teamster for 37 years. He joined TDU in the late 1980s, and never looked back. He was a TDU member for over thirty years, and served on the TDU Steering Committee for a while. He proudly campaigned for Ron Carey in 1991, and in 1999 was elected the President of Local 407 for one term.

In 2004 Al retired from the truck, but not from the movement. If anything, he got more active in TDU and in the community. He was elected to the Maple Heights Ohio city council in 2007. He was diagnosed with cancer that same year; no one would have blamed him for stepping back, but he didn’t know that concept. In 2017 Mayor Annette Blackwell honored Alex as the city’s Citizen of the Year.

Al’s good friend Greg Smith wrote, regarding Al’s role in the Butch Lewis Act, that “In 2013, Alex along with other TDU members started an eight-year grass roots campaign with active and retired Teamster members to protect their pension benefits which were under attack. In 2014, Alex helped start the Northeast Ohio Committee to Protect Pensions, and was also a founding member of the National United Committee to Protect Pensions. Alex considered his years of fighting for pension reform and the passage of the Butch Lewis Emergency Pension Plan Relief Act in March of 2021 his greatest achievements.”

Al was the kind of friend who kept me going when the going got rough. I miss him, but am comforted by remembering his warm spirit, his commitment and his sense of humor.

Al was supported in all his Teamster and community work by his loving wife Patrice, who was also by his side as he dealt with throat cancer and lung cancer for over a decade. Patrice requests in lieu of flowers, tax deductible donations to the Maple Heights Senior Center, 15901 Libby Rd., Maple Heights, Ohio 44137.