The secretary-treasurer of the International Brotherhood of Teamsters intentionally withheld documents from officials who are working to root out corruption in the union, an investigator said. 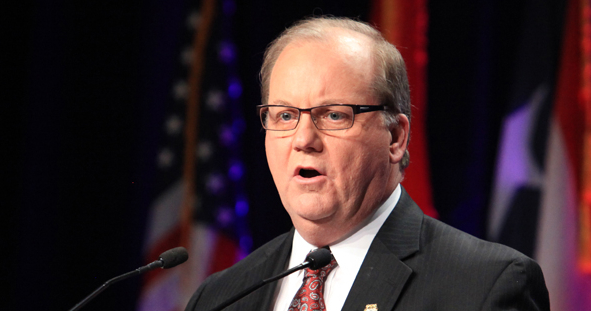 A court-appointed independent investigator Oct. 31 alleged IBT Secretary-Treasurer Ken Hall, the union’s second in command, withheld e-mails and other documents from review earlier this year. The obstruction was intentional and happened while Hall knew about the investigation “of current high ranking Teamster officers, fund trustees and union employees, including Hall,” investigator Joseph E. diGenova said in the statement.

DiGenova is looking into practices of union officers and employees receiving payments and gifts from employers and others doing business with the union. The investigation earlier this year led to Rome Aloise, an IBT vice president, being accused of corruption. Aloise is alleged to have received tickets to a Super Bowl party sponsored by Playboy magazine from an employer negotiating with the union.

The Teamsters entered a consent decree in 1989 to address corruption. The work of the Independent Review Board that oversaw that process has ended, but an independent investigations officer is still monitoring the union. The findings were submitted to IBT President James P. Hoffa.

The allegations come in the midst of the IBT executive election, which started in early October. Hall is seeking re-election on a slate with Hoffa, the longtime incumbent president.

“Joe diGenova, the Independent Investigation Officer (IIO), has turned a garden variety discovery dispute into World War III in order to interfere with the ongoing Teamsters national election,” Caldwell said in an e-mail statement. “There is no allegation of corruption against Mr. Hall but that as the custodian of records he did not produce roughly 50 emails out of tens of thousands that were turned over.”

Election ballots were mailed Oct. 6 and are due back Nov. 14.

Viet D. Dinh, an attorney for the Teamsters, sought intervention Nov. 3 from Judge Loretta A. Preska of the U.S. District Court for the Southern District of New York. The correspondence warned of an intent to file for a “protective order enjoining the Independent Investigations Officer (“IIO”) from interfering with the IBT’s ongoing election through a baseless charge of obstruction against the IBT’s General Secretary-Treasurer, Ken Hall.”

DiGenova’s 42-page document is “pages of bluster, indignation, and assertions of absolute authority is a simple gripe that the IBT had not produced, by our count, roughly 50 emails,” Dinh’s correspondence said.

DiGenova alleged that there have been frivolous attempts to justify withholding documents.

“For example, Hall asserted, inter alia, through his agents that the union documents he was refusing to allow the IIO to examine were not relevant to matters the IIO was investigating or were personal,” deGenova said in the document recommending charges be brought.

Bharara also asked the court to reaffirm “that the Final Order does not provide the Union with authority to unilaterally withhold documents responsive to notices of examination issued by the IIO.”

The leadership had been working with the IIO to “reverse the untoward charges,” but the situation may have been worsened by the charges “leaked” to the public with intentions to change election results, DInh said in his correspondence.

“But almost simultaneously, the charging documents were leaked, triggering exactly the result that the IIO’s intentional act intended: a ‘vote against Hoffa-Hall corruption’ campaign, which included urging those who had already voted to request a new ballot,” Dinh wrote.

The Hoffa slate is up against Fred Zuckerman, head of Teamsters Local 89 in Louisville, Ky. Zuckerman has touted a platform of reform of the union.

Zuckerman Nov. 3 told Bloomberg BNA that he is pleased the investigator moved forward with charges, but he took issue with the timing.

“We have been trying to get this information to our members so they can have a more informed vote,” he said. “It is very frustrating that it has taken this long and we don’t understand the delays.”