Five weeks after carhaulers said Hell No to a concessionary contract by 87%, members have not heard anything on what the International union plans to do. 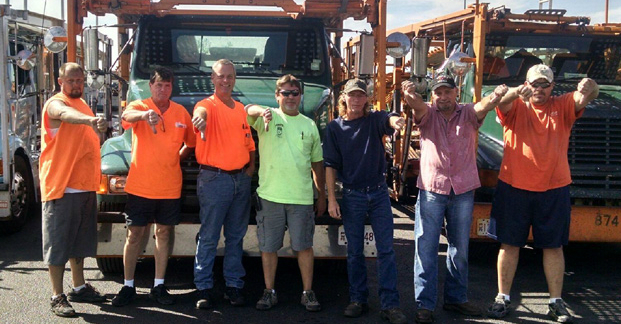 But while the Hoffa administration does nothing, carhaulers continue to build solidarity. One thousand members were on a Teamsters United conference call to talk about next steps. They are active on social media and organizing member-to-member to build even stronger solidarity. Teamsters United—strictly from campaign donations—sent a mailing to all carhaulers in mid-November on next steps and the future.

What will it take?

The IBT Carhaul Division requested locals to hold meetings in early November to ask members why they voted No. This shows just how out of touch Hoffa’s appointees are with members. Their negotiating committee unanimously backed a contract, that garnered 13% of the vote, after multiple mailings, conference calls and scare-tactics to try to sell it. Carhaul Director Kevin Moore and his assistant Roy Gross hail from Detroit Local 299. Local 299 voted 85% NO.

Members, many stewards and some gutsy local leaders have been clear about what it will take. First, get rid of the pay concessions that gut loading, fueling and incentive pay. With the auto industry humming, it’s no time for give-backs. Discard the concessionary pay scheme, and forcing drivers away from home for longer periods. Second, Job security. No weakening of the Work Preservation Agreement to allow subcontracting of so-called “overflow” union work. Third, bargain for the reasonable proposals members and
locals have given to the negotiating committee—instead of just signing the company proposal.

Members have demanded that carhaul leaders who stood with the members be added to the bargaining committee: John Thyer of Local 604, Bill Frisky of Local 964, and Fred Zuckerman of Local 89 (which is the largest carhaul local). Shouldn’t the 87% of members who voted against concessions have at least some representation?

Members need to be prepared to vote NO again, if reasonable gains are not forthcoming. That solidarity can be strong—our union was built on it.

Carhaulers can be an important part of making that happen, by getting active in support of Teamsters United, the coalition team that will replace Hoffa and his worn-out appointees.