Hoffa claims to oppose pension cuts but the Central States plans to announce the worst cuts in Teamster history on October 2. 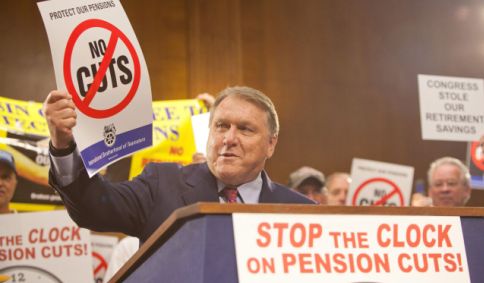 At that time the Trustees will convene a meeting of officers from all affected Teamster locals to sell their so-called “rescue plan.”

Members and retirees should ask their local officers to say NO to this rush deal.

NO because there has been no independent audit.

NO because retirees were denied an independent Retiree Representative, when the fund appointed Sue Mauren – a long-time Hoffa appointee who retired with multiple pensions – to occupy that post.

NO because the Fund has refused to join members in working for positive solutions.

Hoffa’s International officials and the Teamster Trustees on the board will be selling the deal, as the only possible answer.

At the same time the plan is submitted, the fund is legally required to send individualized letters to all participants: active, retired, and those with vested rights, with a report on how much the fund proposes to slash their pension payments or future benefits.

No cuts can be made without a review process, including a vote by all participants.  The guidelines on that voting process have not  yet been finalized by the Treasury Department.