The long-awaited Congressional Government Accountability Office (GAO) report on the Central States Pension Fund is out, and provides detailed background facts which support what TDU and the pension protection movement are saying. 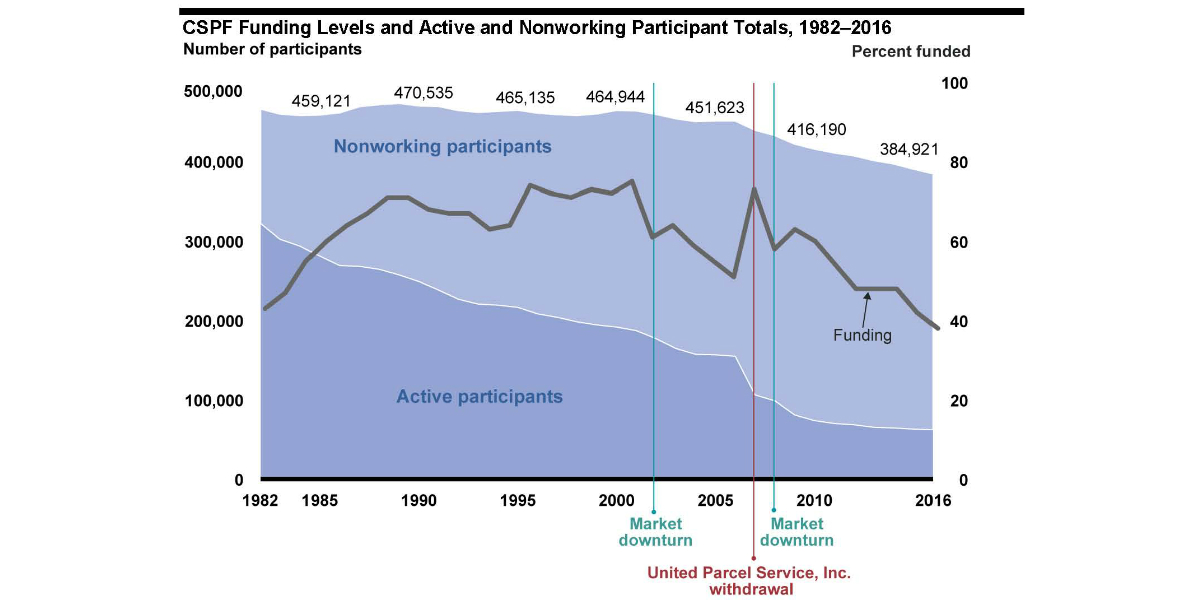 First, Central States’ problems are America’s problem: a crisis is hitting many retirement plans, and the backstop Pension Benefit Guaranty Corporation (PBGC) has no real funding and is thus totally inadequate. Four million Americans are in pension plans presently in “critical” status (Graph on page 22). Deregulation, off-shoring of jobs, and union-busting have weakened our pension system, which is now in need of repair, via Congressional Action.

Second, Central States also has some unique problems that mean action is needed NOW, such as the Butch Lewis Act, before it is too late. The Report notes right up front in the two-page Highlights report that in 1982 69% of participants were working, but that by 2016, that figure had fallen to only 16%. First there was Congressional deregulation of trucking which passed in 1980.  More recently, the report notes the “most dramatic change” as the 2007 decision of the Hoffa administration to allow UPS to exit the plan, undermining the base of support for the plan.

In 1982 the CSPF agreed to a consent order, which prohibited the fund employer and union trustees from controlling the various investments. As a result the new plan fiduciaries sold off the “troubled real estate investments” (page 41) and adopted a more normal investment plan with a wide range of bonds and stocks.

The report devotes some 20 pages, starting on page 38, to CSPF’s investments over the years, with various Wall Street money managers. The bottom line, according to the report, is that CSPF’s investment mix has been similar to other large trusts, with similar results. In 22 years surveyed, CSPF had above-median returns 12 years, and below-median 10 years. (page 60). The CSPF moved half of its investments into passive (“indexed”) bond and stock investments during 2003-2010, and that remains the case.

While noting that the CSPF investments were similar to other funds, under the management of Wall Street firms, it does not mention that in 2008, it was Goldman Sachs and Wall Street which drove the economy and our pension fund into the ditch, while enriching themselves. Goldman Sachs was a CSPF fiduciary at that time.

The last section of the report deals with CSPF administration and administrative fees, noting that they are in line with other large funds and in fact below average. Administration costs (PBGC premiums, actuarial services, auditing, legal, contractors, staff and executive salaries, overhead, etc) were $98 per participant in 2014 (pages 67-68).

The Struggle to Save and Expand Pensions

Anyone who reads the report or the short summary highlights will come away knowing that the dangers to the pension fund are real, and those dangers are not the fault of the hard-working Teamsters who moved, warehoused and delivered America’s goods.

In addition, the report makes clear there is no fairy godmother who is going to fix things. Teamsters, other workers, unions, senior groups and all our allies need to broaden the fight to pass the Butch Lewis Act and to protect the earned pensions of all workers.