Three Constitutional amendments supported by the O’Brien Zuckerman Teamsters United slate were rejected by a majority of the delegates at the Teamster Convention, including a critical protection on members’ right to elect their International Union officers in the future. 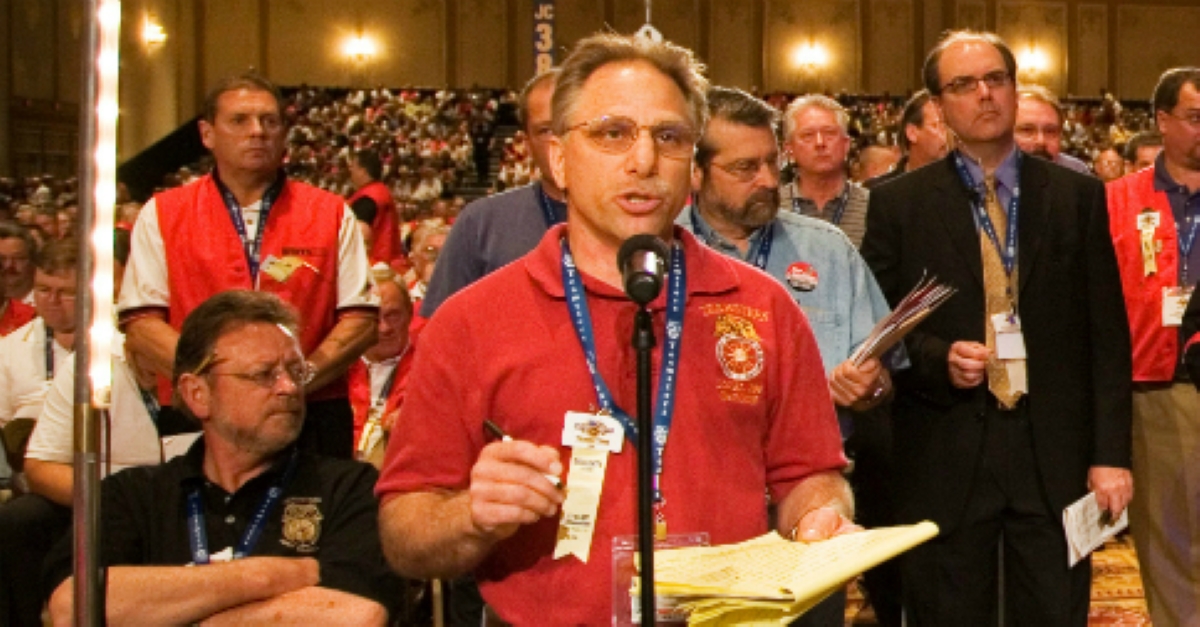 An amendment to add a layer of protection to Teamster democracy was defeated at the Convention.

TDU won the Right to Vote in 1989. Ever since, officials associated with Hoffa have repeatedly tried to eliminate elections by making it impossible for opposition candidates to get nominated to be on the ballot.

It takes the support of five percent of the Convention delegates for a candidate to get on the ballot.

Hoffa supporters have repeatedly said the 5 percent rule should be changed to keep opposition candidates from running.

Fred Zuckerman moved to amend the Constitution to require a super-majority of 75% of the delegates at future conventions to raise that percentage and make it harder to have a contested election.

Fred Zuckerman stated that “Our job as delegates, whatever slate your support, is to protect the rights of our members. That right includes their right to elect International officers.”  He went on to remind the delegates that one Vairma slate candidate took the floor in 2016 to say that the Zuckerman slate should not be on the ballot, claiming that they had no chance and were causing the union to waste money on election.

He pointed out that if the 5% had been 10% or 20%, none of the opposition candidates would have gotten on the ballot, including candidates who got 49% of the vote and candidates who won overwhelmingly in the Central and Southern Regions.

Vairma slate candidate Nina Bugbee stated it would “strip future delegates of the ability to raise the 5% threshold.”   Vairma candidate Josh Zivalich said it was “TDU carrying the government’s water” to keep in the 5% rule. Hoffa opposed it.

The delegates rejected the amendment by a vote of 903 to 677.

Since 1976, TDU has fought for the right to elect our International Union leaders, in one-member one-vote elections with fair rules and an independent election supervisor.

We will continue to defend the democratic rights of all Teamsters.

The IBT General President and General Secretary Treasurer would need at least two years of rank and file working experience to be eligible to hold those positions, under an amendment that was rejected by delegates.

The motion was made by Mark Davison, President of Local 162, who said “Teamsters take pride in the fact that our union is of, by and for our members.”

James Wright, President of Local 822 spoke to the point, saying, “It’s about the future. Put the personalities aside and support it.”

Jason Rabinowitz, candidate on the Vairma slate, attacked the motion as a “Union-busting amendment by TDU.”  Rabinowitz was a partner in a law firm that does work for Rome Aloise, and was appointed a trustee of Local 2010 and moved on up from there; he spoke bitterly against the amendment.

Hoffa gave the last word to Ken Hall and to himself to oppose the amendment.

Closing a Loophole on Salaries Paid by the International

An amendment was proposed to close a loophole on salaries paid to officers who work for the International Union.

The opposition, led by Steve Vairma and Ken Hall, lied and told delegates the purpose of the amendment was to lower salaries, which it did not.

The modest amendment to close the salary loophole for some IBT staff was defeated by a vote 951-631.

Pay Increase for General President Voted Down in Committee

There was a special meeting of the Constitution Committee called during the Convention lunch break to propose an amendment to raise the General President’s salary to $390,000.

Rome Aloise, a key operative behind the Vairma Slate, proposed a big salary raise at an earlier Committee meeting. But an overwhelming Committee majority voted against the salary hike after Hoffa opposed it.

How Did the Delegates from Your Local Vote?

Unlike previous Conventions, delegate votes at the online Convention were kept secret from the members with no transparency.

In previous, in-person IBT Conventions, votes on motions were taken openly, by voice vote and then standing vote if it was called for. Delegates and guests could observe how delegates voted.

This time, there is no record of how delegates voted on constitutional motions. The lack of transparency makes it impossible for members to know for sure how their delegates voted.