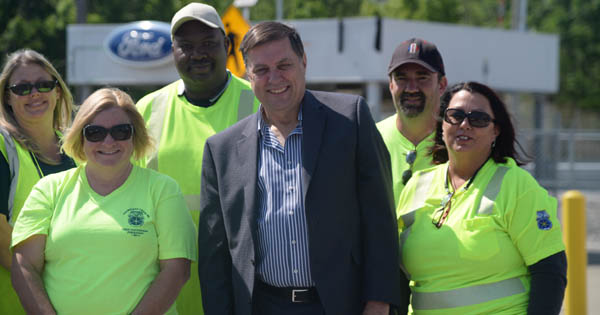 Teamsters United brought together local officers and members who fought contract givebacks and the worst pension cuts in Teamster history.

Rank-and-file Teamsters and local officers took time off to leaflet, phone bank and reach out to members because they believe that informing and mobilizing Teamsters builds power.

And Hoffa-Hall? They campaigned like they have governed: through patronage, suppressing information, corruption, PR and spin.

First, Hoffa-Hall tried to prevent the election altogether by blocking Fred Zuckerman from getting on the ballot at the Convention. They failed.

Next, Hoffa-Hall used union resources to hide massive corruption from the members. Rome Aloise was charged with racketeering charges in February, but Hoffa-Hall schemed to delay Aloise’s trial until after the election.

For eight months Ken Hall has obstructed corruption investigations by deleting and withholding thousands of emails and documents. That cover-up is headed before a federal judge, but these facts were hidden from the members until almost all the ballots had been cast.

We wish more members had voted. The accumulated years of information blackouts and contract sellouts have taken their toll.

The only reason that 210,000 ballots will be cast is that Teamsters United organized at the grassroots to turn members' cynicism into change. That’s what we have to build on for the future.

As General President, Fred Zuckerman will build union power by informing, mobilizing and listening to the members and uniting activists and local officers to fight back together.

Throughout this campaign, Teamsters United has unleashed the power of Teamster activists and officers. Hoffa-Hall has suppressed them through election violations and corruption cover-ups. That’s what weakens and divides our union—and that’s why they have to go.

Teamsters for a Democratic Union (TDU) is proud of our role—and the role of our members—in fighting for Teamster democracy and a new direction in 2017.

We are proud to support Fred Zuckerman, Tim Sylvester and the entire Teamsters United slate—and we look forward to working with them after they win.

Teamsters United has shown us how Teamster Power can be rebuilt. Let’s count the votes, open a new chapter with their victory, and get to work.