Rome Aloise, who is suspended from all Teamster positions and offices for taking employer payoffs has endorsed the concessionary UPS deal. Will members buy what this corrupt official is selling? 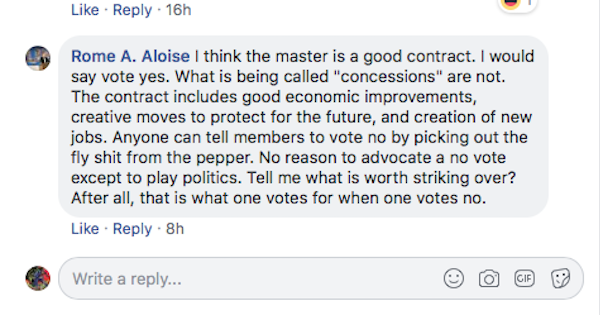 But sometimes corrupt officials just sell out for free. Aloise took to Facebook today to endorse the UPS contract and denounce anyone for opposing givebacks.

“What are being called concessions are not,” Aloise said. He accused UPSers who oppose two-tier 22.4 Hybrid Drivers or $13 an hour wages for part-timers of “Picking the fly shit out of the pepper.”

Read 10 Reasons to Vote No at UPS

Aloise tells Teamster officials that he is running for IBT president in 2021. Already, suspended from the union for taking payoffs, rigging union elections and signing a sham contract, Aloise will now add backing UPS contract givebacks to his resume.

You can read the judge’s decision on Aloise’s corruption, and also about Aloise’s history of scabbing on strikes here.

Then read UPS’s contract offer and decide for yourself.

Read 10 Reasons to Vote No at UPS