The proposals have been approved for the UPS national contract. Here are some of the issues that will be on the table when negotiations begin in January.  (Reprinted from www.TeamstersUnited.org) 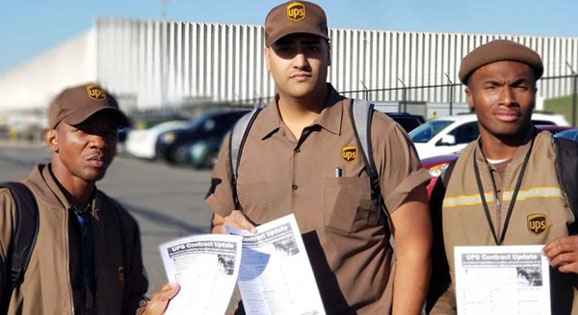 The Teamster proposals for the national UPS contract were set at the Two-Person meeting of local union representatives on October 17. In an unprecedented move, the Hoffa administration confiscated all copies of the Bargaining Proposals after the meeting.

As a result, we can only report a summary of some of the national contract demands, without any of the actual language.

Teamsters United put forward strong 9.5 proposals—and many of them were approved as the union’s bargaining demands. Now, we have to fight to win them in the contract.

Under the Article 37, all package drivers’ hours would have their work day reduced to under 9.5 hours per day with the exception of November and December.

Teamsters United proposed that all work after 9.5 be voluntary and drivers should have the right to return to the center after 9.5 hours worked.

Hoffa's Package Division sidelined this demand. Instead, they are proposing a 9 p.m. curfew for package drivers under Article 18. This curfew would still allow for a 13-hour day.

Article 37 currently has no penalty for harassment violations. Grievances are routinely settled with “The Company will comply with Article 37.” This solves nothing.

The contract proposals include mandatory financial penalties for harassment violations as proposed by Teamsters United.

The minimum penalty would be 4 hours pay going up to a maximum penalty of one week’s pay depending on the severity of the offense.

An Article 37 Committee would be created at the National Grievance Panel to hear harassment grievances that deadlock at the local union and area grievance panel level.

An arbitrator would sit in on harassment cases and break the tie if the Article 37 Committee deadlocked.

In one of the weakest proposals, a supervisor who is repeatedly found guilty of harassment would only be forced to appear before the Article 37 Committee. We have to do better than that!

Teamsters United proposed to give local unions the ability to force management to meet within 72 hours in cases of widespread harassment and to strike if the problems are not addressed. The Hoffa administration rejected that proposal.

The union’s proposals demand the creation of 10,000 full-time 22.3 jobs over the life of the contract, with 2,000 jobs created each year.

The company would be required to maintain 22.3 jobs in the local where they are created and to issue reports to local unions so that full-time job creation can be policed.

No national contract proposals were presented on Saturday and Sunday work or other scheduling issues.

The contract demands would eliminate the loophole that allows UPS to use technology to fire employees for “dishonesty.”

No changes are being proposed to Article 7 (Local and Area Grievance Machinery) or Article 8 (National Grievance Procedure). Apparently, Hoffa and his Package Division appointee Denis Taylor think the grievance procedure is working just fine the way it is!

Teamsters United proposed giving local unions the right to strike on deadlocked grievances or when management is violating grievance settlements. Hoffa and Taylor did not include this in the proposals.

Members flooded the IBT with proposals on Article 18—and many have been incorporated into the union’s bargaining demands.  The contract is an opportunity to win improvements on heating, cooling, ventilation, mirrors, tires, seats and other equipment.

No proposals have been discussed yet on wages, pensions, healthcare, retiree healthcare, or reducing the four-year
progression. These economic issues are taken up later after most language issues have been resolved, but they are central to the concerns of UPSers.

Many good language proposals will be on the bargaining table. Now, we have to fight to win them. That requires informing and uniting the rank and file.

The Hoffa administration’s secrecy accomplishes nothing. It weakens the union and our bargaining leverage when the UPS Teamsters who have to live under the contract are kept in the dark.

The company knows what the issues are; they create the problems every day. UPS management already has the union's proposals for many supplements and the company has turned over proposals too. None of these have been made available to the members.

The IBT should make the union’s Bargaining Proposals available to UPS Teamsters and mobilize the membership to win our demands with no concessions.

Teamsters United will continue to inform and unite members to fight for a good contract.

The national contract can only be approved by a vote of the members. 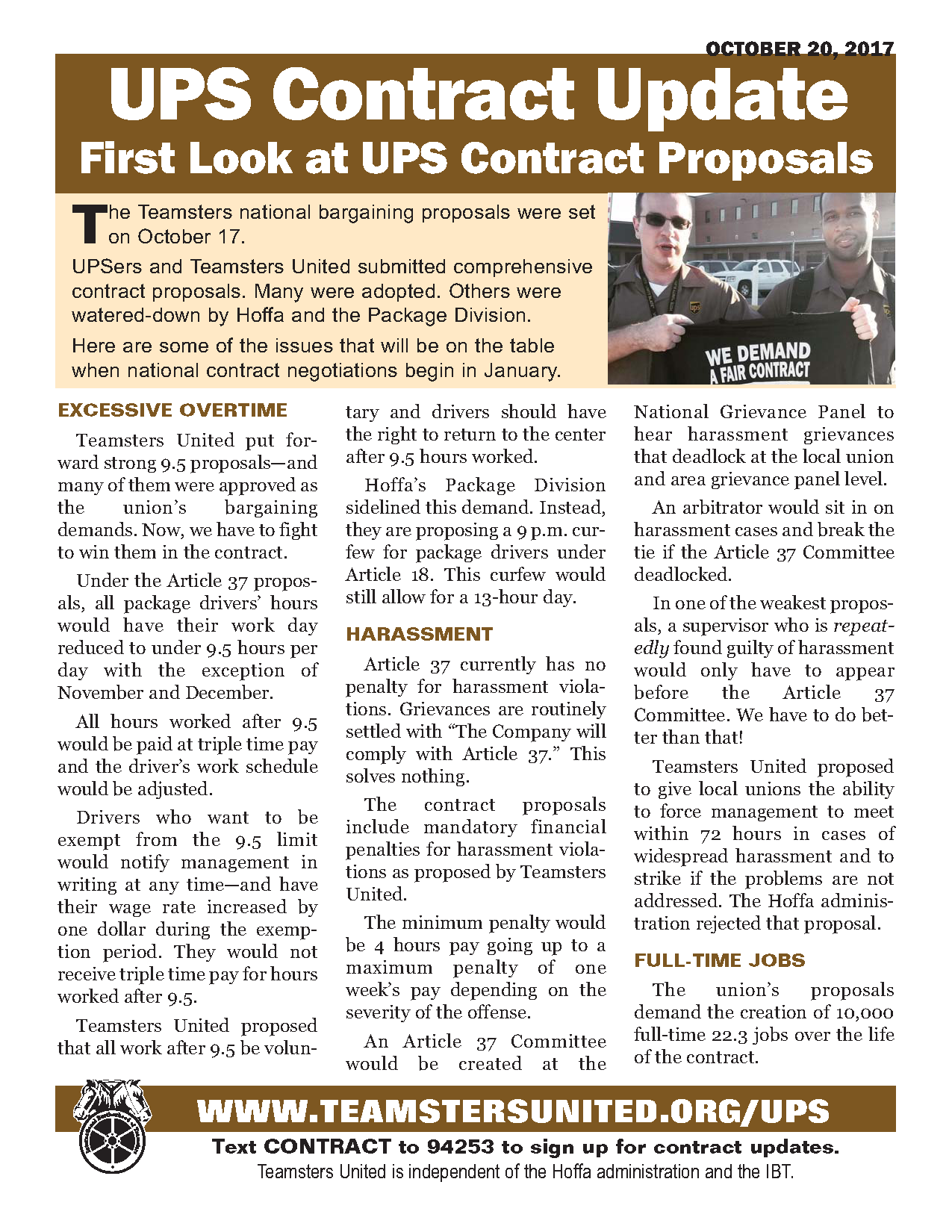