Yesterday the National Press Club hosted the Teamster General President Candidates Forum, and one candidate for General President showed up: Fred Zuckerman. James Hoffa used the IBT’s leverage to insist on a clause in the Election Rules allowing him to send a stand-in: Ken Hall. 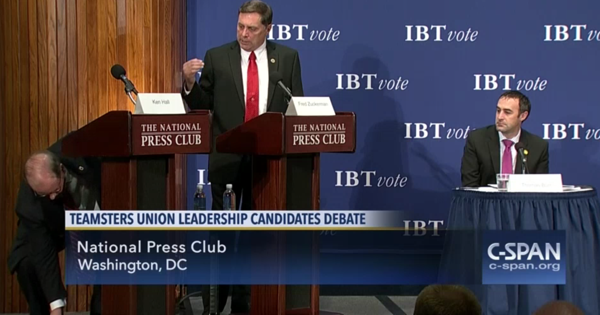 You can watch the recorded 90-minute debate.

When questioned by the press panelists about Hoffa’s no-show, Hall said he was busy representing members—and anyway, Teamsters had seen him so many times on picket lines, he doesn’t need to debate.  Zuckerman pointed out that this was the third time Hoffa had ducked an opportunity to debate him.

Zuckerman stuck close to the themes of the Teamsters United campaign:  Save Teamster pensions, eliminate corruption, and organize for Teamster power and stronger contracts.

Hall was Mr. Smoothie, who came prepared by IBT handlers to evade those issues.

For example, when Zuckerman challenged him on the charges of racketeering, sham contracts, gifts from giant Teamster employers against Hoffa’s western running mate Rome Aloise, Hall countered by charging that a member of Local 89 had pushed another member during an argument! As if an unfortunate “screw-you” argument between two members in a parking lot is the same as an International vice president making corrupt deals with an investment broker who then takes Hoffa and his entourage to Europe for golf outings.

On organizing, Hall said the Hoffa administration has organized over 200,000 workers and organized the most in core industries in 50 years.  Try telling a freight Teamster that tale.  Zuckerman pointed out that the union has lost 150,000 members, even while merging with several other unions.

On Teamster power, Hall stated that he is proud to tell UPS part-timers that the average part-timer makes $31 per hour, when benefits are included.  Try standing outside any UPS hub in the country with that written on a poster, see how long you’d last.

His big charge against Zuckerman was that Fred backed Hoffa prior to 2008 and asked for a seat on the General Executive Board, but was denied and is now running against Hoffa out of spite. That Zuckerman worked for Hoffa is not news -- in many speeches, Fred talks about his time working for the Hoffa administration as the Carhaul Director, and that Zuckerman finally broke with him over Hoffa’s refusal to organize in carhaul and his failure to build Teamster power. Zuckerman did not deny that he is angry, but reminded Hall that this is not about his feelings – working Teamsters, just like Fred, are angry about concessions, pension cuts, and industry stagnation. Zuckerman also reminded Teamsters that Hall was found guilty by the Election Supervisor of trying to bribe Zuckerman with a salary and IBT pension in 2010, and Fred rejected the bribe.

Paul Hazlett of Youngstown Local 377 asked about Hoffa’s sell-out national contracts in freight, UPS, UPS Freight and carhaul. Incredibly, Hall blamed the repeated national rejections on Zuckerman “playing politics.”  Zuckerman said the rejections stem from Hoffa and Hall being in bed with employers instead of listening to members.

Zuckerman was right to stick to the big issues facing Teamsters: 17 years of Hoffa has led to a weaker union, a reliance on corrupt power-brokers, and 500,000 Teamsters facing a loss of pensions.

If Hoffa and Hall are on the right track on those big issues, they deserve re-election. But if you think Hoffa’s 17-year reign has been long enough, vote for Fred Zuckerman and Teamsters United.