Hoffa can't run on his record so he is targeting his opponents with fake "grassroots" campaigns, a dirty tactic known as astroturfing. 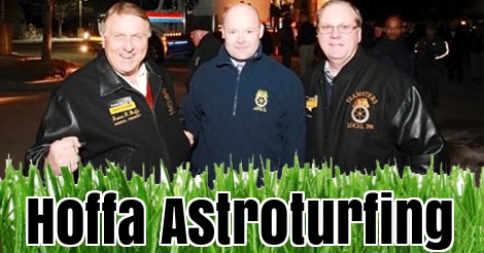 Hoffa's version is to pour big money into campaigns that pretend to be "rank-and-file" but are actually bought, sold out to, and staffed by Hoffa PR operatives.

Astroturfing (as-truh-turf-ing)
a PR tactic used in politics of masking the sponsors of a political cause or organization to make it appear as though it originates from and is supported by grassroots participants.

Hoffa's astroturfing strategy paid off in Local 804 where his campaign operatives organized and financed the "804 Strong" campaign that narrowly won the local election this month with 34 percent of the votes.

You can make up whatever lies you want when you're hiding behind an astroturf campaign!

Now a new astroturf campaign is on the scene with the same name in a new local. Hoffa operatives are using a group called 251 Strong to spread new lies and undermine reformers in Local 251 in Rhode Island and Eastern Massachusetts.

The local front man for the Local 251 effort is Joe Bairos, a Hoffa supporter who members voted out of office in the last election. Bairos was backed by Hoffa Vice President Sean O'Brien who was suspended for two weeks by the Independent Review Board for a campaign video that caught O'Brien illegally threatening to punish members who voted against Bairos.

This time, O'Brien is staying behind the scenes and letting Hoffa's astroturf campaign do the dirty work for him.

Astroturfing was invented by corporations as a way to counter money-poor, people-rich grassroots campaign with a cash-rich, supporter-poor alternative. Hoffa has now imported this corporate tactic into our union. Members can defeat it with an organized, grassroots response.