How Hoffa-Hall Tried to Steal the Vote in the South

Hoffa-Hall tried to steal the election in the South before it happened. They even rigged elections to get their way. How grassroots organizing saved the right to vote and paved the way for the Teamsters United victory in the South. 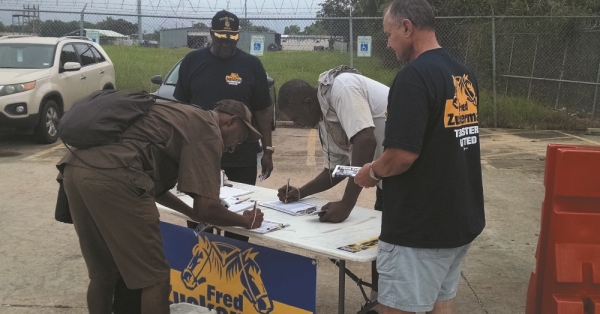 Hoffa-Hall teamed up with local officials to try to prevent the 2016 International Union election from being held at all. The West and South were ground zero in their assault on Teamster democracy.

Not a single principal local officer in the South publicly supported Fred Zuckerman for General President.

To get Teamsters United on the ballot, members had to mount rank-and-file opposition slates against local officers to be elected as delegates to the Teamster Convention where the candidates are officially nominated.

And that’s where the election-rigging started.

Teamsters United protested the stolen election—and appealed the case to Judge Kathleen Roberts who ruled against Hoffa-Hall and Ken Wood and ordered a re-run.

Across the rest of the South, local officers used the power of incumbency to win their delegate elections. The vast majority ran unopposed.

Officials Out of Touch with the Members

But when members got our chance to vote it was a different story.

Teamster officials in Dallas Locals 745 and Local 767 voted for Hoffa-Hall—and to keep Fred Zuckerman off the ballot. The members voted for Teamsters United by heavy margins.  Airline Local 19 voted 89 percent for Fred!

Teamster officials in Atlanta Local 728 and Local 528 voted for Hoffa-Hall—and to keep Fred Zuckerman off the ballot. The members voted for Teamsters United by 63 percent in Local 728, the biggest local in the south.

The story is the same in Nashville, New Orleans, Baton Rouge, Jacksonville, Little Rock, San Antonio, Orlando, Knoxville and in every rail unit in the South—BLET and BMWE.

The results in the South show how out-of-touch local officials are with the members, how deep they are in Hoffa’s pockets or both.

More importantly, the results show the importance of grassroots organizing in our locals—and that we can’t wait until the ballots are out to take action.

A small, committed group of active Teamsters saved the right to vote in the South by getting involved early and running for Convention Delegate.

Their involvement didn’t start with the delegate races. The same Teamsters had been organizing in their workplaces and locals: fighting givebacks, enforcing their contracts, opposing pension cuts, and standing up for change.

TDU is proud to have stood with these Teamster activists. Democracy isn’t a spectator sport. In the Teamsters, democracy is high-stakes. Use it or lose it.

As we celebrate this victory in the South, let’s remember how we got here—and how close members came to having this victory stolen from them.

If that concerns you, get in touch with TDU. Democracy is literally our middle name—and we fight to preserve and expand it in our union.

Click here to send a Congratulations Message to John Palmer and Kim Schultz—to let them know you will stand with them to rebuild Teamster Power.