In These Times Reports on the Teamster Election

[Re-posted from In These Times]

The struggle between Hillary Clinton and Donald Trump for the White House is crowding out much of the other news of the day, including the battle for the presidency of the 1.3 million-member International Brotherhood of Teamsters. 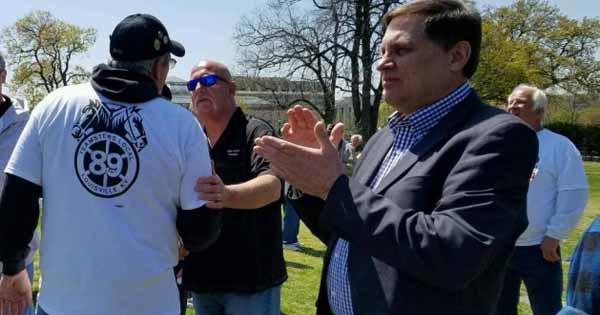 Fred Zuckerman, president of Teamsters Local 89 in Louisville, Kentucky, is challenging incumbent James P. Hoffa for the union’s top spot. The election, which officially kicked off when Zuckerman and Hoffa accepted their nominations in July, is being conducted using mail-in ballots, with the final vote counting set to begin November 14. The Office of the Election Supervisor, which is independent from the Teamsters, is in charge of conducting the vote.

It’s an uphill battle for Zuckerman. Hoffa was first elected in 1998 and has been re-elected easily three times since then. In the most recent election, in 2011, Hoffa wonabout 60 percent of the vote in a three-way race against challengers Fred Gegare and Sandy Pope.

Undaunted, Zuckerman tells In These Times that conditions in the union have changed since the last election and insists that Hoffa is more vulnerable than ever.

“I feel very good about it [the campaign],” he says. “We got an early start and we have built up a good network of supporters. The key for us is to build up a higher turnout.”

According to Zuckerman, Hoffa has benefitted from a pattern of low voter turnout in past elections. Turnout has fallen since rank-and-file elections for president were first introduced in 1991, with 2011 marking an all-time low. In that year, only about 250,000 union members filled out ballots and sent them in.

“Only about 10 percent of union members actually voted for Hoffa last time, and that means we have a lot of room to grow,” Zuckerman says. “Our challenge is to get a bigger percentage of the members engaged, so a larger pool of voters can break the pattern.”

Furthermore, rank-and-file unrest is growing, Zuckerman reports. The union’s long-term problems with pension funding blew up in 2015, when new federal legislation opened the way to reorganize failing Teamster pension funds by cutting benefits for retirees. A grassroots effort to stop proposed cuts in the union’s Central States Pension Fund called attention to the festering financial problems and provided an organizing platform for Hoffa opponents, he says.

Perennial union issues like substandard collective bargaining agreements and low-level corruption have also gone unaddressed by the Hoffa administration, according to Zuckerman.

“I see a growing realization [among union members] that Hoffa is unable or unwilling to deal with these issues,” he says.

The strategy of focusing on turnout is sound, offers Pope, the former Teamsters candidate and member of Local 810 in Long Island City, New York. Voter apathy signals a feeling that the current union leadership is ineffective, she says, so the reform-minded Zuckerman slate of candidates would benefit from high turnout. Pope joined forces with Zuckerman this year and has been campaigning against Hoffa.

The pension issue is vitally important to the election, Pope adds. “It’s a train wreck,” she says, in reference to the problems arising from the Central States Pension Fund. “This is huge in the Midwest,” among members, and a strong Zuckerman vote there could well make the difference between victory and defeat, Pope says.

“And Fred is just a good candidate overall. Everybody in the union knows that he was a supporter of Hoffa in the early years,” she says. “He broke with Hoffa for good reasons—mainly the mismanagement of our contracts and our pensions—so I think a lot of members can relate to that.”

Finally, Hoffa’s opponents are hopeful that the concurrence of the Clinton-Trump electoral contest will have the side effect of producing a higher turnout in the union election.

“Hoffa has endorsed Hillary and I’m hearing a lot of complaints about that,” Zuckerman tells In These Times. “Trump will do very well among Teamster members. I recently made a trip to Dayton [Ohio] and it was amazing to me how strong Trump was there.”

He says he hasn’t endorsed either presidential candidate.

“Our members don’t need anyone to tell them how to vote when it comes to politics. I want them to think about the future of the union and whether they are satisfied with the status quo. They shouldn’t be, and that’s why I’m running,” says Zuckerman.