Southern California grocery warehouse Teamsters fought valiantly against a concessionary contract this past week, but officials were able to get the deal passed by a 51% vote. 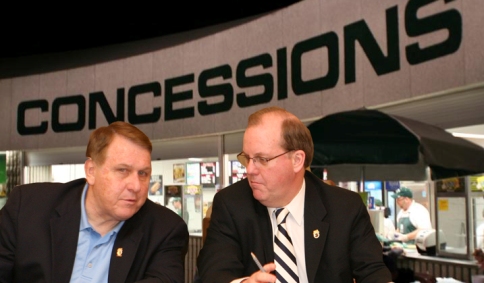 Now Teamsters are asking what they can do to change our union to prevent such sell-outs.

Southern California drivers and warehouse workers at Vons (Safeway) and Ralphs (owned by Kroger) networked among the various locals, and where they got out information they were able to deliver a No vote. But they didn’t have enough time to reach all Teamsters, especially in Local 63, where a big Yes vote got the contract passed. It was rejected in Locals 572 and 848.

Teamsters are now stuck with a 5 year contract with concessions. At Ralphs, annual seniority bidding is gutted, creating hardship for families. The companies were given a two-year “holiday” on health and welfare increases, because the fund has sufficient reserves.

The contract is a master agreement and sets a pattern for Teamsters employed at Unified Grocers, Stater Brothers, and Albertsons (which now owns Vons), for 8,000 LA-area distribution Teamsters at some of the largest Teamster employers.

Where members had information they overwhelmingly voted No. Where members were misled and misinformed they voted Yes. The leadership recommended ratification on a contract that was so bad they themselves admitted if they were workers they would vote No. Bottom line is bad leadership. We need new leadership starting from the top. That new leadership is Tim Sylvester and the Teamsters United Slate.

Members are asking “what can we do?” The answer is to nominate rank and file slates of delegates to the Teamsters Convention to give members a choice in the IBT election to vote in new leadership at the top, and to build Teamster power in the grocery industry.