Anti-labor Governor Matt Bevin teamed up with the billionaire Koch Brothers to lock union members out of a public hearing on a proposed Right-to-Work (for Less) law in Kentucky. 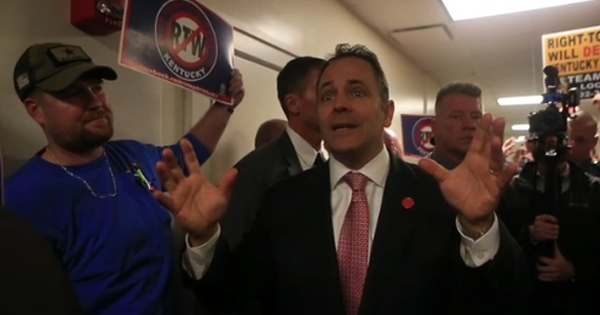 Hundreds of union members converged on their State Capitol to speak out at a public hearing on a Right-to-Work bill yesterday, only to find that their First Amendment rights as citizens had been sold to the highest bidder.

By law, the hearing was open to the public, but Teamsters from Louisville Local 89 and other union members were barred by state troopers from entering.

Before the hearing even started, every seat was already filled by employers and their anti-worker allies, thanks to a stunt pulled by the Governor and the billionaire Koch Brothers.

Americans for Prosperity, an anti-labor group founded by the billionaire Koch Brothers, booked the Capitol Annex for a breakfast before the hearing.

After the suits finished their breakfast, they refused to leave their seats—blocking anyone else from the public from attending the hearing.

Unions boo Gov Bevin as he enters right-to-work cmte. Americans For Prosperity, chamber give him a standing ovation inside pic.twitter.com/jjlm6FZYHn

Union members protested in the hallway outside and confronted the Governor as he came in and out of the hearing, including Teamsters Local 89’s Stephen Piercey, who managed to get in a few questions to the Governor.

Piercey’s exchange with the anti-labor Gov is priceless and says everything you need to know about the phony premise behind Right to Work.

Stephen Piercey: “You always talk about how this is supposed to be about choice. A member should be able to choose whether they’re in a union or not. If they don’t feel their union’s doing a good job, they shouldn’t have to pay dues, right?”